Citizens of Tropico, it’s time to prepare for launch because Tropico 6 – New Frontiers is out now on PS4|5, Xbox One, and Xbox Series X|S consoles. Published by Kalypso Media and developed in-house by Realmforge Studios, the newest DLC for the award-winning franchise sees El Presidente take his search for glory to new galactic heights. Is your space suit ready?

In Tropico 6 – New Frontiers, players can use the new Space Port Complex to construct rockets and delve into research to keep the international competition at bay. It’s time to launch Tropico into a triumphant new future as you take on the Space Race, walk on the Moon and establish the first Mars colony of humankind – you were running out of places to send those pesky political opponents anyway. With the all-new Mission Mars campaign, buildings, edicts and characters, there is plenty to be explored and endless possibilities to make more money. But be warned, nobody knows what unforeseen circumstances await in the vast expanses of space. You’ll need to be creative if you want to avoid aborting your mission.

Plus, for his most loyal supporters, El Prez is happy to provide some new content for Tropico with the just-released Tropico 6 update - featuring bug fixes and a new free landmark, the Moonlander.

Tropico 6 – New Frontiers is out now on PlayStation 4|5, Xbox One, and Xbox Series X|S consoles with a 10% launch discount on the Microsoft store. The cosmic DLC is already in orbit for PC.

The eagle has landed! Or is it a llama? 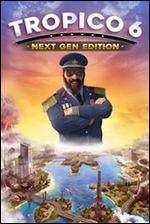