The racing game masters from Codemasters are taking spectacular car-collision action to new metal-crunching heights with an unmatched dynamic damage engine to be featured in the upcoming Pro Race Driver.

The damage engine devised for Pro Race Driver is based on real-life data. Researching and prototyping the engine for the game involved creating a computer simulation of a crash test facility. By using this, the 58-person development team at Codemasters is ensuring its car models will react authentically on impact with the correct movement and crumpling of car body parts.

The result is Pro Race Driver’s Finite Element Modelling (FEM) damage engine. The FEM damage model accurately simulates the deformation of a car’s structure over the duration of an impact, calculating how both the internal structure and outer bodywork of the cars react. This physics based approach gives unparalleled realism with different impact results every time depending on the exact conditions of the collision.

Pro Race Driver will make its debut in June 2002 on the PC and next-generation console systems.

Update: I forgot to tell you fine people that we have screenshots, click on "Product Profile" to check them out
Source: http://www.xboxaddict.com/ 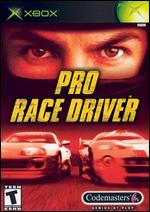 Xbox one no signal
Post by debrartin
0 Replies, 102749 Views