Worms 4: Mayhem promises innovative new worm vs. worm warfare where players can create a fully customizable team of up to six worms in numerous environments, including multiplayer battles for up to four players. The game also includes a new weapons factory, allowing players to blow up their opponents in explosive new ways. Additional game play highlights include: § Multiple game modes, including the 25-mission Story mode, Multiplayer via Xbox Live® or GameSpy (PC), Network play, and Challenge mode; § Customizing Worm teams with their own unique look, sound, and playing style; § Exclusive new weapons such as the Tail Nail, Poison Arrow and the all-new Sniper Rifle; § Random level generator that creates huge, varied and vibrant themed scenarios, making each level a unique playing experience; § Unlocking various trophies and secrets as players destroy your opponent in more and more creative ways; § 3D world with all of the hallmarks of the original 2D game.
Source: http://www.majescogames.com 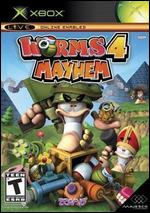 Xbox one no signal
Post by debrartin
0 Replies, 102807 Views