Try and escape the nightmare in Without Escape

Can you escape the nightmare in Without Escape and find the answers you’re looking for?

We are bringing the first-person point & click horror adventure Without Escape to consoles. Developed by Bumpy Trail Games and ported by eastasiasoft, Without Escape is now digitally available.

Inspired by horror adventures of the early 90s, Without Escape takes players on an unforgettable journey from our “reality” straight down to a hellish plane of existence.

Without Escape is a tribute to first-person graphic adventures of the early ’90s with an interactive story told through pre-rendered backgrounds and full-motion video. Explore the confines of your own home as you flip between a mundane existence and a terrifying otherworld. Are you prepared to endure the horrors that await you? 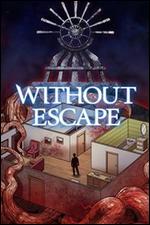 Xbox one no signal
Post by debrartin
0 Replies, 38886 Views