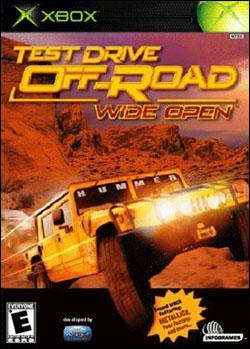 This game is from the makers of Midtown Madness for the PC, what happend? This game is an obvious port job, meaning that it came from another console with lesser abilities, and it shows. The AI is so bad."

Overall: A very fun game. While it can be frustrating at times when the stupid computer drivers try to run you off of the road, it is very fulfilling watching them spin off the side of a cliff ROFL :) If you are a fan of off-road racing, this is def worth a rental


Gameplay: Way fun to drive around and try to get revenge on those stupid computer drivers. Upgrade your vehicle and try to unlock hidden vehicles such as as Monster Trucks and such. If you have a steering wheel/pedal combo such as the Thrustmaster, this game is great! Even with just the simple standard controller, this game is fun to play.
Graphics: Um.... graphics are not at all what they could and should have been. This was kinda a dissappointment. Not enough to make you not want to play as the game moves very fast, but better graphics would have made this just a bit better :/
Sound: Sounds are not bad. However, the soundtrack simply rocks! Especially on long tracks where the soundtrack will rotate to a new song. Great job on the soundtrack.
Suggestions: Better graphics. Plain and simple. Use the X's power for graphics and wow us. Maybe even give us a gun to shoot the stupid computer drivers when the make us go insane ;)

Overall: Really enjoyed the game good sound good action good controls and free roaming was very nice.........
Gameplay: Great appeal loved the multi player that is what was used the most with the brothers in law brought the whole family together.
Graphics: Great graphics maybe could have been a little better with the capability of the xbox, but they were not bad.
Sound: good sfx and great soundtrack need good rocking music for a racing game makes it more exciting and intense
Suggestions: Only thing I could suggest is to tweek the graphics and let us use our own soundtrack!!

Overall: I bought the game with my XBOX in a package on the first day. I didn't know anything about the game and when I first played it, I admit that I did not enjoy it at all. I guess it grew on me. If you get past a couple of things and really understand how to control the vehicle, it can be a lot of fun.
Gameplay: Gameplay is pretty good. By no means can you say that the racing is life-like or realistic in any way, but it's a video game. I enjoy a bit of complexity in a game. This game is not just your average drive around a track racing game. There's a lot more to this game than that. There are often multiple ways to finish a race. I like the off road feel of the game. I also enjoy being able to control the pitch of the vehicle while you are in the air. If you don't learn this, then you will not win the more difficult races. It is impossible to keep from skidding off in the wrong direction if you do not control the pitch and make your car land flat. The AI in this game is competitive. They don't mind playing dirty and take every chance they get to knock you off the road. That's cool. Once you learn how to steer out of it, you can learn to do it to them the same way. It is just as easy to send them careening as it is for them to do it to you. Multiplayer is also entertaining, but I like to accomplish something when I play video games. This can only be done in single race on the hard levels and career modes. I especially like the hidden cars and the hiddden level that can be opened. I think they were well worth my while.
Graphics: PS2 port. What more can I say. While the graphics are satisfactory, they could be much, much better. This is my least favorite aspect of this game. The vehicles are cool, but they certainly lack the detail that has arisen in games like rallisport and gotham. There is no damage engine, but sometimes that can actually detract form the gameplay in my opinion.
Sound: I like the music. This music works well for racing, especially off-roading. Sound effects are minimal, but mainly because you can't hear much over the music besides the engine. Needs to have an option to play your own music too.
Suggestions: Make a saving option that works better for having a hard drive. Don't ever bring a PS2 game straight to XBOX without spending any time at all altering the game to work with the obviously superior system.

Overall: This game is a good game made horrible with bad graphics (not even as good as PS2.Also not nearly enough off road cars to impress me.Also there really is no object to it making it even less enjoyable.
Gameplay: Pittiful gameplay really no object to keep you interested in playing it more than five minutes and the graphics are sub-par.This is one of the worst games ever.
Graphics: Biggest disapoinment to me was the grapics it really is worse than any other game for the X Box with jagged edges on everything.
Sound: Sound is very average and can be ok at times but still not even close to what the X Box is capable of.If you want to try a game with cars and is a lot of fun try simpsons road rage.
Suggestions: You've got a good idea just look over the game and clean up the many mistakes.