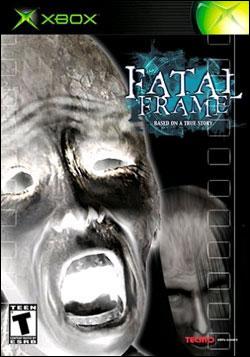 There are no zombies, dinosaurs or giants, as a matter of fact there's not much of anything for most of Fatal Frame, except you and a big, empty mansion. The terror in this game isn't in your face, it's behind you for a split second, then it's beside you, then it's gone: lots of big open space, no corners to hide in to feel protected and safe. Most survival horror titles have an abundance of enemies, the fear caused by the feeling of being overwhelmed, Fatal Frame kinda sneaks up and grabs you from the dark, and when you spin around, it's gone."

Overall: This is the best horror game i have evered played. Its has that amazing scary scene and scarty ghosts they pop out move slow move fast there just damed scary ghosts. And i total recomed this game to anyone who loves chinese people and good horror fun.
Gameplay: In this game its simple your a girl whith a camera trying to capture gohsts and find your brother and you play in a old house and a graveyard and a creppy underground den.
Graphics: The graphics are clean and crisp theres nice backround graphics to give the game a even more erie feel to it.With a hint of fuzzyness at times to just give it that kick the game needs at diffrent fmv's.
Sound: The sound is nice and loud screeching sounds of course gots that nice bassy feel to it if you no me i like the bass. So The sounds good makes it more scary cause theres like loud screaming sounds but most of time its quite so it really pulls it together.
Suggestions: Your game was awesome and cant wait to play fatal frame 2

Overall: This game is great in graphics and everything except one big thing called addictive gameplay. The story keeps you wondering and interested but the gameplay is a turn off and especially maddening when she runs extremely slow and can't duck or dodge.
Gameplay: Sorry but this game is a pain in the !&%$@#* to play sometimes. It was cool haveing a camera but the girl runs so slow from a serial killer ghost i just didn't get the hang of it but it is still a pretty good game.
Graphics: Creepy ghost and ropes and trees and camera angle and broken down house was great. The characters were pretty good but the lights and shadowing could have been better.
Sound: Sound was teh best part of this game. Freaky voices and gasps and heart beat and screams. Teh voices were prety good and everything made it erie and great to play.
Suggestions: I suggest you make the girl a faster runner, make her run smooth and make it so she can dodge severed heads flying at her head or move aside as a ghost comes flying at her. It was great you got the message through and the game was good but i didn't get any fun or anything out of it.

Overall: So Far, I love it. I mean, it's freaky and keeps me guessing. I can't play this game at all without jumping or my heart rate speeding up faster and faster. I love it.
Gameplay: Awesome. Yes she walks very very slow, and the running doesen't help much either, But the controls are easy and fun.
Graphics: Awesome. I feel like im right there with her. Truley amazing. The way everything is placed and they way everything moves makes it creepy and fun
Sound: CREEEEEEPY. The sounds are what make this game the terrifying game it is. I play it on Dolby Digital Surround, and its freaky. Truley FREAKY.

Overall: A slow-paced, anxiety-filled search for your orphaned brother takes you through a haunted mansion. I've owned Fatal Frame since shortly after it's release, but only now beginning to appreciate the game's overall value. I'm an FPS or driving sim type of gamer. Most of the time. Any game that requires me to slow down and pay attention to menus has to have some redeeming feature(s) to keep drawing me back. Fatal Frame has several. With the 2003 XMAS season on the way, I expect the price of this game to drop. Do yourself a favor...pick it up when it does!!!
Gameplay: Armed with a camera, and other enhancements, you must search every inch of a haunted mansion and it's grounds. You photograph spirits in order to banish them, and keep you from harm. The controls can be a bit of a hassle depending upon the view that you're in.
Graphics: Impressive. The attention to detail is what kept drawing me back. The camera view can be absolutely astounding!
Sound: The soundtrack is very eerie. Custom sound tracks are not supported, but are entirely unnecessary anyway. Some games don't really depend upon sound. The sounds in this program help to put you in the right "frame" ahem, of mind.
Suggestions: I applaud TECHMO for this very entertaining game. I recommend they work a little closer on the controller issues next time though.

Overall: The overall description of this game was outragios!Resident Evil was better than this game.I was disappointed.
Gameplay: The gameplay of this game was awfull.I got bored after a few hours.It is not a game to buy.I wont buy another game like that again.
Graphics: the visual effects were gory but I did like that part of the game.It would have been a good game if it were a different game.
Sound: the sound was like a big joke.I was laghing half way through it.I was greatly disappointed.I do not like this game.

Overall: I was a bit weary about this game as I wasn't into another horror game after I played Silent Hill 2 (which I thought was totally boring, in my opinion)
Anyway, I am glad I've got hold of this as it is an excellent purchase


Gameplay: This game is really scary it all starts out in black and white and then turns into colour as you go though the game, where in most games your given guns, flame-thowers etc, etc in this one your a little girl trying to find out what happened to her brother and all she has to protect herself is a camera

I think the thing about this game
is that you will be absorbed into it I've played it for sometime now and I know I've been there, this it is really spooky and is a definite purchase for someone whose looking for horror/puzzle game

I would like to mention that this game was based on a true story
Graphics: The graphics in this game are sharp and solid, the ghost and the characters all play there part, in reference to the games graphics looking like RE it's a hit and miss affair here as the graphic in FF do look like CGI (shame the girl hasn't got a shadow) but you can't really compare them to the Gamecubes RE as in the Gamecubes RE they've made them look like real characters where in FF they don't....sort of
Anyway graphically it is beautiful

the 4.5 is for the girl not having a shadow
Sound: GREAT if you've got constipation this will help you poo your pants the sound is great especially if you listening to it in surround sound, I'm telling you you'll be jumping this way and that as you play the game I can't tell you to much about this as if your going to buy it you'll soon find out why

Overall: i got this game before it was realesed!! i got it oct 29 it is insane the sound the graphics the gameplay ...you couldnt ask for more
Gameplay: graphics are insane this is like or even better then the RE Series
!!!!!!!!!!!! MUST HAVE!!!!!
Graphics: INSANE...well at some parts and i mean SOME parts are choppy but besides that it is very good .......
Sound: THATS WHY THIS GAME IS SO SCARY!!!!!!!without the sound alice in wonderland would be scarier and thats the dammn truth ya heard!
Suggestions: please make a sequal PLZ it will sel better then the RE series i can guarentee it