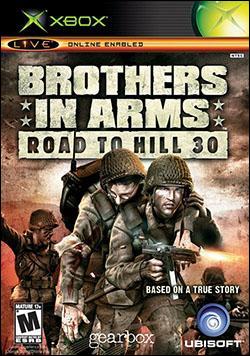 read more
Based on a true story. Set during the famous airdrop before the invasion at Normandy, Sgt. Matt Baker and his squad of 101st Airborne paratroopers were scattered over the French countryside. As the story unfolds, the player (Baker) must choose between the success of his mission and the lives of his men – his brothers in arms. Brothers in Arms will immerse players in the historic eight-day invasion of Normandy – with unparalleled imagery, authenticity, sound and gameplay.
Score: 93
Overall User Average: 9.20 / 10 (92.7%)
Gameplay User Average: 9.20 / 10
Graphics User Average: 8.60 / 10
Sound User Average: 9.40 / 10

Overall: WWII theamed squad shooter. Reminds you of both your a-typical shooter and a squad game, ala Full Spectrum Warrior.
Gameplay: As far as gameplay goes, its a tossup. Your individual controls are very nice, tight controls. The "Iron- sights" addition to the zoom function is a nice touch. (If this is not your bag, don't sweat. You can turn on a traditional reticule).
However, the squad controls are a bit clunky. I don't know how many times I try and tell my second squad to surpress a position for them to go off and rush them. Its not the order I give, but the controls are so very similar in nature it gets easy to mix up.
Graphics: Decent graphics. Not the best I have seen, yet not the worst. I can not give it very low marks because of the nice touch's added to the game- such as tracers, and "dirt spray".
Sound: I have two words for you- Directional Sound. Just about all games support Pro Logic surround sound anymore, but to have a game acurately support 5.1 is just amazing. when the firing starts you will know where it is comming from just by listening. Another nice touch is point of origns on the speaking parts as well. If someone is speaking to you, and your not looking at them, the sound moves to orientate itself to your heading. Awesome.
Suggestions: Moving mouths are nice, so that you know who the speaker is....but baby gibberish? Thats what it looks like to me. The mouth animations are just too clunky for me to not hear the Charlie Brown teacher voice in my head everytime I see someone speak in the game..."Whaa Whaa Wha Whaaa"

Overall: Like Band of Brothers the game, a truly immersive WW2 shooter, but with the squad/tank tactical combat dynamic that is a huge part of the game, those who run and gun will have to take it slow and think. Tons of extras to unlock, and upon beating the game you get to see the sheer amount of research and detail that went into making this great game.
Gameplay: Once again, not like your average WW2 fps, a lone wolf attitude will get you shot and quick. A game that makes you really care about the NPC's under your command becuase they can save your life. All the authenticism will really immerse you into the tense feel of things.
Graphics: While it may not win awards for overall graphical beauty, the detail in level deisgn, weapons, vehicles, buildings and soldiers makes it feel alot like war. The sheer detail and research that went into this one makes other WW2 titles look cheap and cheesy.
Sound: The weapon sounds were recorded from the actual weapons, the explosions, troop movement, commands, voice acting and backgound nature sounds are done well, but don't steal the show. The little things like the sound of bullets ricocheting off the cover you are behind and intersquad chatter keeps it very realistic.
Suggestions: A very well done game, leave it to Ubisoft to trump all other titles in the genre, with their first foray into the realm nonetheless. The game may seem long to some, or short to others but only takes place in a short span on time. The "end of the beginning" as said at the end of the game, so hopefully a sequal(s) are in the work...would love to see one on the Xbox 360.

Overall: "The night before D-Day, 1994. The paratroopers of the 101st Airborne Division are dropped into Nromandy and scattered behind enemy lines. As Sgt. Matt Baker, lead your squad through eight harrowing days that will define history, and unite you forever as brothers in arms."(from game" Basically this is balls to the wall, shooting,ducking,flanking, and trying to stay alive to complete the game. If you are looking for a good shooting game, dont get this game. If your looking for one of the best on Xbox as of right now, this is your game.
Gameplay: Easy to move your troops and CYA! Game play is very good, better than I could have imagined in a game. Yes, there some glitches but I would take this game with its minor glitches over any game without any. Contols are set up nice, autosave is good. Excellent game overall, great job! Played online shortly and it took a bit to get use to, but if your expecting a one on one shoot up this isnt for you. Its you using your men to complete a task and if you die, you choose another member until your team is dead and then you have to start from the beginning of the map. I think the online play will make this game have a lasting appeal, GIVE ME DOWNLOAD CONTENT!
Graphics: 480p, looks great and is one of the best games I have seen in a long time. From the two opening scenes, one of getting blasted from a tank and the other paratrooping into enemy lines, I knew this game was gonna look awesome and it didnt disappoint me.
Sound: 5.1-Alot of great sounds if you have the system to experience it. Just incredible. Ubisoft once again has proven itself to be a leader on Xbox, keep the great games coming.
Suggestions: Only have one problem, while online I was stuck in a carriage and couldnt get out, couldnt jump, couldnt run out. Also had a soldier just kneeling and moving like he had a gun and didnt. Minor glitches on a bad side. Make more maps available in the future, maybe some more weapons. If you can do that you will make alot of people very happy. Make another title for the NextBox or whatever you call it. Add more levels and 1080i. Truly a great game, anyone who likes shooters SHOULD have this game.