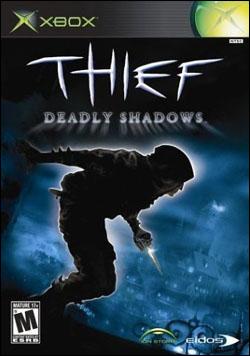 So far, I have only played this game through the first couple levels, and I must say, these guys have done a great job keeping it real. Everything in it is great - graphics, sounds, AI is decent, everything. I remember pirating the first Thief back when it first came out, and I couldn\'t afford it due to the fact that I was just entereing high school."

read more
In this next chapter of the Thief series, gamers once again take on the role of the master thief Garrett. The stealthy character is rarely seen, never caught, a master of the ambush and capable of breaking into the most ingeniously secured places. Garrett steals from the wealthy and gives to himself, making his living in the dark and foreboding City. Although Garrett would prefer to be left alone to ply his trade, the prophecies of an impending Dark Age dictate a different plan for the thief. Thief pioneered the concept of stealth action on the PC, and gives gamers the opportunity to truly play a thief. Take advantage of Ion Storm’s groundbreaking dynamic lighting and shadow systems -- every character and object, including Garrett, cast realistic, movable shadows that effect stealth gameplay.
Score: 87
Overall User Average: 8.50 / 10 (87.0%)
Gameplay User Average: 8.25 / 10
Graphics User Average: 8.50 / 10
Sound User Average: 8.75 / 10

Overall: Wow, what a great game. Excelent story line, that's the best thing in the game. I haven't finished the game yet, i want to know what's going on, but i don't want to end the gameplay.
Gameplay: Very nice. The shadows are excelent, as the case sais, real time shadows, and its true. Even though this is supposed to be in medievel times, there is electricity.
Graphics: Nice visual nothing Ninja gaiden like, but the cutscenes are really good. This is a visually nive game.
Sound: Great sounds. This game is obligated to have great sound because you need to hear the footsteps of your enemies.
Suggestions: Hope, your sequel will be better than this one, with a better storyline than this one, wich will be tough.

Overall: i am new to the thief series, but familiar with the stealth genre... thief: deadly shadows is a good game, offering an athmospheric, fun and challenging game... it is no splinter cell, but few are... a good game overall
Gameplay: gameplay is easy to get used to, and doesnt seem as but complex as splinter cell (which can be good or bad, depending how you look at it), and it lacks moves, like the rolls, jumps and stealth manouvers you can perform in splinter cell. gameplay is enhanced by an optional 3rd or 1st person view point, and both work prety well... although there are sometimes problems regarding the camera angle in 3rd person. enemy AI does not seem to be great, and enemies repeat the same things alot. frame rate is sometimes slightly slow, but not to the extent that gameplay is effected...
the game also boasts a good physics engine, like that of deus ex, but it is quite slow to respond to movement and actions.gameplay is good, and is similar to that of deus ex, and is only let down by being slightly repetative... but the pros outweigh the cons...
Graphics: it is again visually similar to deus ex, which is no insult... nice lighting effects, and great textures make this game great to look at... but there are no real visual effects, it all seems like fancy textures and lighting, i would have liked to see some nice water effects, and grass and trees responding to wind... but that is less of a complaint, and more of a suggestion... for what already is a very nice looking game.
Sound: sound is good, and will let you know if you are being heard... effects are good and varied, like when walking on wood you hear that hollow clunking sound, when on metal you hear a light tapping noise, and when on gravel, that crunching sound... overall, it does what it is meant to do... and it does it well... however characters voice acting is quite sarchastic, and exactly great... but that is a small complaint, sound is good.
Suggestions: in this game there is very little replay value, and if you want to compete with the likes of splinter cell you will need a multiplayer mode... and i would sugest using a better engine, but this game will probably not only be on xbox and pc for its next outing, as EA are probably buying eidos out... shame

Overall: its a good game, im jsut not one thats into the stealth as much, so i guess it wasnt really a game for me, but i still enjoyed it
Gameplay: the gameplay was good, the ai was surprisingly good, and the controls were fine. the stealth was better than in lots of games ive played in the past, and i didnt feel the need to just go and kill everyone i saw, like i do in most stealth games. the one thing i didnt like, was how i could almost never climb on anything with the climbing gloves. it said climb any wood, metal or stone surface, but 9 out of 10 times, i couldnt climb at all, and it cost me lots of life
Graphics: very good visuals. garret looked exeptianally good, lots of detail. thers not much to say about it, they were just good.
Sound: the music was a more silent creepy music, jsut to get u into the whole stealth mood, but the voice acting was good. the conversations u can listen to, can be quite entertaining as well.

Ion Storm Closes
Eidos has officially closed the doors on the innovative game studio, Ion Storm. Apparently, this is a part of Eidos move to consolidate it’s development forces.
Eidos Confirms New Thief Game
Edios has confirmed they will develop a sequel to Thief, also adding that it will be a more modern style of game.
Eidos Gives Business Update
Eidos today released a report charting their current business events, and the status of their company.
Thief: Deadly Shadows Bug Reported
Reported glitch in the PC and Xbox versions of the game causes saved expert games to revert to default difficulty.
Eidos Confirms Commandos Strike Force
Eidos is set to bring a previously unannounced tactical first person shooter titled Commando Strike Force to Xbox.
Exclusive Thief: Deadly Shadows Screenshots!
Take a peek at some fresh new screens from Eidos soon to be released Thief:Deadly Shadows.
Eidos Announces 25 to Life
Eidos has announced 25 to Life to be released on the XBox and PS2 and is set to include online team gameplay. This game is rumored to be a team-combat style of SOCOM, while mixing it in with GTA's style of urban-street fighting.
Thief Goes Gold!
Eidos today announced that its highly-anticipated, action-stealth game Thief: Deadly Shadows, developed by Ion Storm, has gone gold for the Xbox video game system from Microsoft and the PC.
New Thief Screens
Check out these new screens of the highly anticipated title from Eidos called Thief: Deadly Shadows.
New Thief: Deadly Shadows Screens
Fans of stealth games, get ready to head back in time. Thief: Deadly Shadows is going to test your sneaking skills like they've never been tested before. Think you can sneak your way into a heavily guarded castle?
Thief: Deadly Shadows Coming Soon
Eidos announces Thief: Deadly Shadows, the eagerly-awaited third instalment in the legendary action-stealth Thief series.