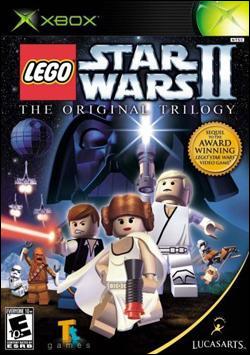 Master the Force, Brick by Brick! With a comical take on the Star Wars Trilogy that revolutionized pop culture forever (Episode IV A New Hope, Episode V The Empire Strikes Back and Episode VI Return of the Jedi), LEGO Star Wars II follows the Rebel Alliance’s battle to dismantle the Galactic Empire and rebuild a galaxy in pieces. From Darth Vader’s pursuit of Princess Leia aboard her Blockade Runner to a showdown on the reconstructed Death Star, the game includes even more of the family-friendly LEGO action, puzzles and humor that earned the original LEGO Star Wars such popularity and acclaim.
Score: 90
Overall User Average: 9.00 / 10 (90.0%)
Gameplay User Average: 9.00 / 10
Graphics User Average: 7.00 / 10
Sound User Average: 6.00 / 10

Overall: Tottaly aweseom starwars action...but with legos. Everything in this game says quality. Except the camera but what platfor game has a good camera?
Gameplay: You take control of a little lego character and shoot/jump/lightsaber duel/ and take control of starwars vehicles. There are also little puzzles that have to be solved based on specific character powers and they are not too hard and not too easy, just hard enough to keep the gameplay going.
Graphics: This game does not stretch the xbox 360's hardware...but for a platform game not bad. For some reason Princess Leia's hair is superb..wierd.
Sound: Ummm nothing too special here...just your normal starwars sounds...and your normal lego clicking noises when youre building something.
Suggestions: Upgrade the graphincs a little for the 360. and more control over the camera.