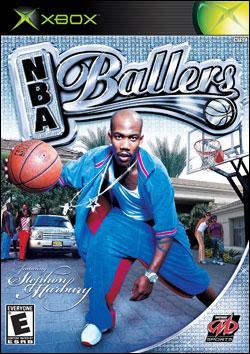 NBA Ballers is the only basketball videogame to deliver the pure essence of basketball by highlighting the excitement and intensity of the one-on-one confrontation, set within the alluring fantasy lifestyle of the NBA superstars. Featuring 60 current and 24 all-time player legends, NBA Ballers takes the game out of the arenas and into some of the most lavish NBA player fantasy "cribs" for an up-close and personal one-on-one experience. NBA Ballers features current NBA stars such as Tracy McGrady, Chris Webber and Kobe Bryant, and NBA Legends including George Gervin, Magic Johnson and Wilt Chamberlain.
Score: 78
Overall User Average: 7.80 / 10 (78.0%)
Gameplay User Average: 8.00 / 10
Graphics User Average: 8.00 / 10
Sound User Average: 7.60 / 10

Overall: This seemed like a great concept when I first heard about it, but after playing the game, I am sort of disappointed.
Gameplay: The story is pretty good, and in tune with today's reality tv craze. you are a contestant on a reality tv show and you have to work your way up the ladder and one day face and hopefully school nba all stars like lebron and shaq. The bad part about the game is this: it takes a while to get used to the controls and everything, and once you are accustomed to them, it's all good right? wrong. by the time you have mastered the controls the game is old, leading to multiple shouts of **** why did I waste my time on this. but in all honesty, it was fun while it lasted.
Graphics: the visuals are very good, and the player models and visual customization is top notch. you can choose from a wide selection of bling, hats, shoes, shirts, pants, watches, etc.
Sound: some of the trash talking can get annoying after a while, but hey, I guess that is the point of trash talk. . :D

other than that the sound is pretty good.

Overall: meh, its an alright game. . . i like it a little less than NBA street vol. 2 but I liked it more than hoops. . . The best thing about the game is the caracter models. . . they look exactly like their real-life counterparts, its actually really creepy. . .
Gameplay: Its basically NBA street vol.2 (action and style oriented) except its 1 on 1 and you get to pimp up your character with all sorts of ghetto chic accessories. . . oh yea, the controls are pretty solid too. . .
Graphics: wow. . . The players look amazing. . . lol they look so god !&%$@#* real that i was scared they'd come out of the TV and kick my !&%$@#* on my driveway court. . .
Sound: meh, bounce bounce, grunt, swish. . . its the same as any other b-ball game. . . i didn't really notice the music at all
Suggestions: hrmm, i can't really suggest anything except maybe let us do 2 on 2 or something. . .

Overall: Not very appealing. Im usually into all the sports franchises, but this really dosent go with the classics.
Gameplay: I liked the moves and shots/dunks, other than that the character was hard to move, and took to long to reply to comands.
Graphics: Nice graphics, could of been more in depth. characters hands were stuck together, mouths didnt move or anything like that.
Sound: Good sounds, if your into rap and r&b, allright for everyone else,(as long as you have it on mute).

Overall: i like the game a whole lot except for the fact that then my marbury so sorry on the hole game and labron is not good carmelo is way better then him on baller but i like the whole game i think everyone should have by now
Gameplay: They should gave sumbody the spot light who can actually play good him is soory on there but it's a good game.
Graphics: Hte graphics a soo good on there they mad everyone look so real and even your baller look real like everyone else
Sound: there is great sound on the game i just wish i could put my own music on there in stead on that they got on there.