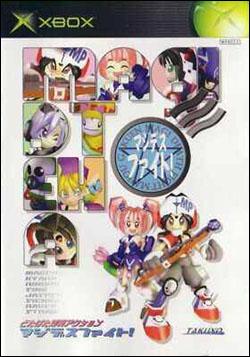 Magi Death Fight is a top-down action game. There are two game modes: a single-player/cooperative campaign and multiplayer deathmatch mode, supporting up to four players. The game takes place in an arena. Four different color balls of magic energy float around randomly in the arena, and can be picked up and fired at your foes. By holding down the fire button you can control how far the ball shoots. The balls do no damage until the end of their travel, at which point they explode, damaging whatever is beneath them.
Registered Members: 51,449
Forum Posts: 725,925
Xbox One Titles: 3,359
Xbox 360 Titles: 1,086
Xbox 360 Kinect Titles: 95
Xbox 360 Arcade Titles: 586
Original Xbox Titles: 987
Staff Reviews: 2,125
Member Reviews: 10,339
News Articles: 15,936
Screenshots: 34,795
Xbox 360 Achievements: 45,112
Xbox 360 Faceplates: 2,016
Cheat Codes: 1,706