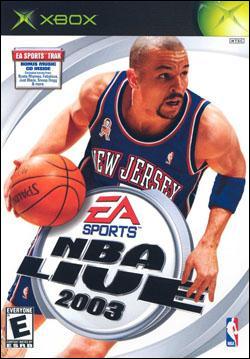 Overall: This game is the game that I've been waiting for soooo long. It does most of the things right, controlling is easy and gives the player lots of freedom, amazing graphics and smooth animations ;)..

A perfect 5 from me...even though I am an Anti-EA guy :D
Gameplay: The gameplay is pretty tight. Its arcadish, and I love those kind of games. The "Freestyle" is not that big as it was described, but it still kicks ass. Gameplay modes are nice, and controlling your players are fun :p
Graphics: I love this game...and one of the reasons behind is its beautiful graphics. Its all bright and smooth, unlike some other in the genere. The players looks like their real life counterparts. Animations are smooth and....sexy :p

Sound: This is the first hoopz game ever where I actually noticed the sound, and the audio totally dragged me IN the game. The ambience (sp?) is awesome, as well as "DEFENSE!" "DEFENSE!" chant, players SFX, dunking sounds (Boy, they SURE SOUND B--I--G). My subwoofer just go crazy when somebody dunks, and it just totally awesome.
Suggestions: One hell of a game. Really really good job. But some xbox exclusive goodies (i.e. hdtv) would make it even better ;)

Overall: I was one of the few people that enjoyed Nba Live 2003. So i was obviosly gonna buy the 2003 version. I was not dissapointed, the new freestyle is good, but i don't use it much, it really give you too much of an edge over your opponent, and its just more fun playing a passing / shooting game.
Gameplay: Gameplay is simple, pass, shoot, steal, and then there is the freestyle feature, it takes a little time to learn, but after a while it gets old and stupid. To use the freestyle you push move the right joystick and the trigger. Pushing things like up will make your player point the ball up, making a circle with the joystick will make your player turn around, these moves are fun to do, but get old, i prefer playing more realistically, but i will still use the freestyle. There are lots of dunks, and other moves too. Players actually have realistic rankings, last year you would have 90's Michael Jordan a 93, everyone else good in the game like Iverson would be 88, Shaq was 89. This year 90's jordan is 99, Shaq was 99. The francise is still kinda weak, not a big improvement over last year, it plays about exsactly the same and is presented the same.
Graphics: Live 2003 is an improvement over last years, this year the players are more detailed, and move much more realistically. Dunks, layups are actually beliveable this year. Courts lighting affects arent anything to brag about, overall its a nicely polished PS2 Game.
Sound: The sound in this game is more apealing than last year, you had pretty crappy music in last years menu and in game, this year you have "MTV RAPPERS", so i guess its ok even if you dont like rap. sound affects in this game sound pretty decent

Overall: overall the game is one of the BEST
basketball games around. the freestyle
control is the best feature this year. but its
a shame they did not add xbox live
support. but i recommend this game to
every gamer out there.
Gameplay: the gameplay is way better than last
year's disappointing game. at first the
freestyle control will be a little difficult but
after about 10 minutes you'll get the hang
of it. they shoud have added the fast
paced game a long time ago.
Graphics: the graphics are great. i like the useless
cutscenes. they improved alot since last
year. not much to say in this category but
still it earns a perfect 5. It was also a
good thing they did not make the
graphics like NBA 2K3's graphics which
as poor.
Sound: the commentary is good. it doesn't feel
repititive. i like the soundtrack
alot....especially with snoop dog in it.
Suggestions: keep frestyle, if you are going to edit
freesyle, make more wicked moves. and
keep the gameplay as it is....or add some
more cool feats.

Overall: Its ok I guess, not as good as it should be. NBA 2k2 was better in my opinion because although both games are too easy to score in, Live is way worse. It looked pretty decent at first glance but after awhile they all look pretty similer. Over all the game is just ok, nothing special.
Gameplay: The gameplay is nice...if you have the ball. Yes its easy to stop the computer, but its still too easy to score no matter the difficulty. Playing against friends sucks to because all anyone has to do is get the ball inside to a big man and their auto-dunks. Defense got better once I found out about using the stick to square up/box out better, but either way your opponent can score if they have only a mediocre player. Also, the franchise mode is weak because once you get into the years certin teams get all the good free agents for a year, win the Championship, and let all of them good for next years champ.
Graphics: The graphics are ok. They look like bodies, but the color isn't very good nor are the faces. Thank god for the jerseys!
Sound: The sounds were nothing special, no better then 2k2 or 2k3. They do have all the easy stuff(balls bouncing, fans cheering, etc) but not enough of the little things.
Suggestions: Fix the cpu's D ability and the franchise for starters.

Overall: DIS GAME IS DA SHIT IT MAKES NBA LIVE 2002 LOOK BAD. THE NEW MOVES U CAN PULL OR OF THA HOOK AND THE WAY U EXPLODE TO THA BASKET. SOME ROOKIES R IN IT AND SOME ARENT. THEY SHOULD HAVE ALL ROOKIES. THEY DONT EVEN HAVE THE WORST PLAYER EVER: YAO MING HE SUX BUT IT WOULD STIL BE FUN TO PLAY WITH THAT BIG FAG. I LIKE HOW U CAN PIK UR JERSEYS AND HOW IN CREATE A PLAYER THERE ARE NEW TATOOS AND A TON OF NEW KIX BOTH OF THEM R TIGHT. ITS GOOD THAT IN THIS ONE THERE IS ACTUALLY A COACH AND THE PLAYERS DO TIGHT SHIT LIKE PLAY WITH THE CAMERA, SIGN AUTOGRAPHS, AND DO SHIT LIKE SITTIN IN THE COACHES CHAIR ITS PRETTY TIGHT.
Gameplay: THE GAMEPLAY IS GOOD I HAVENT PLAYED 2002 IN A WHILE CUZ THE LAST BASKETBALL GAME IVE BEEN PLAYIN IZ STREET HOOPS AND THE CONTROLS R DIFFERENT FOR THE 2 GAMES SO IT TOOK ME A LIL TO GET USED TO IT BUT THATS AIGHT. ITS HARD TO GET OFFENSIVE REBOUNDS THO ITS PRETTY EASY TO BLOK SHOTS AND SHIT. ITS REAL TIGHT BEIN ABLE TO CALL OUT PLAYS ON THE COURT IT HELPS A LOT
Graphics: THESE GRAPHICS R REALLY GOOD THEY HAVE IMPROVED A LOT SINCE 2002 THE FACES R TIGHT AND YEA EVERYTHING ELSE IS GOOD GRAPHICS.
Sound: THE SOUND IS BETTER THEN THE LAST ONE AS FAR AS WHEN SHOTS BRICK AND WHEN SOMEBODY DUNKS AND U CAN HEAR THE PLAYERS TALKIN AND THE FANS TALKIN.. COMMENTARY IS ABOUT THE SAME
Suggestions: KEEP IT UP

Taking players on an exciting adventure through the amazing world of Peppa Pig, the trailer reveals famous locations seen in the globally recognized TV series.

Conway: Disappearance at Dahlia View is a gripping observational thriller set in 1950s England. When 8-year-old Charlotte May is reported missing from Dahlia View, retired detective Robert Conway searches for the truth behind her disappearance.

More buses, more brands and freedom like never before! Bus Simulator 21, the most extensive bus driving experience in the history of the popular game series, is ready for departure.

Xbox one no signal
Post by debrartin
0 Replies, 53828 Views