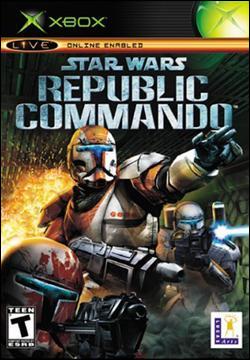 Mission briefings set the tone in this dark first-person shooter, as players lead their squads on a variety of assignments such as hostage rescue, infiltration/data retrieval, elimination, assault, sabotage and reconnaissance operations. Your three-man team is controlled through an intuitive and accessible "smart squad" command system, based on squad markers and stances. The game features more than fifteen levels, with exercises covering both familiar and new Star Wars settings and characters, including the introduction of the mysterious General Grievous and his deadly bodyguards from the upcoming Star Wars: Episode III.
Score: 95
Overall User Average: 9.50 / 10 (95.0%)
Gameplay User Average: 9.50 / 10
Graphics User Average: 9.50 / 10
Sound User Average: 9.67 / 10

Overall: Star Wars Republic Commando is one of the more recent Star Wars games from LucasArts. I was not particularly amazed by it, however, it did provide an enjoyable gaming (and obviously ?Star Wars?) experience. The game is very unique, aside from the fact that there is practically no Jedi seen throughout the game. You take control of a group of Clones and battle mission by mission. The game is set after Episode II and follows a style of gameplay somewhat comparable to those tactical Tom Clancy games. I recommend this game to Star Wars fans. However, if you?re a hardcore Star Wars fan (like me), there are better games out there. This is probably one of the only Star Wars games that I would recommend MORE strongly to non-Star Wars fans, especially because of its focus on action, shooting, and squad-based tactical gameplay.
Gameplay: Gameplay is pretty simple - and unique to the world of Star Wars gaming. You take control of a Clone and fight your way through missions together with the rest of your squadron (also comprised of Clones). Game design is very clever. What I found exceptionally interesting was the ?revival? thing, where - if you die - another Clone comes up revive you. The style of gameplay is quite similar between single-player and multiplayer. I mainly judging the single-player experience, which is the one I mostly played through. Although gameplay is interesting, it does get somewhat repetitive and tedious at one point.
Graphics: Graphically, the game is also impressive. The developers of Star Wars Republic Commando have treated gamers to some nice visuals. It certainly matches up to the visual majesty of Star Wars. Nothing too spectacular, but impressive as mentioned.
Sound: Sound has been well implemented into the game. Nearly all Star Wars games, including this one, have amazing sound. The music and voices were good enough. Nevertheless, the game maintains a high quality for its attention to sound effects - especially those sound effects familiar to veterans of Star Wars games.
Suggestions: It?s difficult to make a suggestion for this game. Not that the game needs major improvements, but more that it is ?missing? something.

Overall: A fantastic star wars game and not a jedi in sight.......no, im not lying. This could very well be the best star wars game yet!
Gameplay: An amazing first person shooter, this time with the star wars treatment!. Droids, Clone Troopers, geonosians, etc......its all good!
Graphics: Top Notch xbox graphics. The star wars universe is created perfectly with not only your squad looking immaculate, but also your enemies and your surroundings.
Sound: All those blaster noises that you've come to love over the years are in there, along with the excellent score (done here by the movies John Williams!).
Perfect sound.
Suggestions: Co-op/vehicles/3rd person sequences/jedi

Overall: You are a leader of Delta Squad, the game is unofficially set after Episode 2 (Clone Wars). With lots of cool commands and stuff
Gameplay: This game has the best ever dialogue like

AND MORE!!
Graphics: its good, but not the best, the movement is good, i like how it shows the helmet, it just feels cool
Sound: the trandoshans sound trandoshany, battledroids sound like the movie kind, the wookie sound great too
Suggestions: Co-Op, maybe, or maybe we can drive vechicles!!

Overall: A very well done game. It took me four hours or so just to do the first two levels. A very nicely done game that is very fun to play.
Gameplay: The game play is awsome. Droids come in wave after wave and your squad really helps you. You CAN pick up the alien weapons, look down at the m and push A. Then hit down on your d-pad (not pushing A as this will use squad commands) and you'll get to your secondary weapon. The regualr weapon in the game, the DC-17 lacks a lot of punch, and I find myself running out of ammo in a firefight. Might I recommend to all gamers out there that you fire in controlled bursts. The SBD's are really hard to kill and I find myself just lobbing grenades at them. The controls feel nice and all-in-all a very nice game.
Graphics: The graphics are very well done. Not the best graphics on a game, but they pull the job off famously. Not too much I can say except that they're effing good.
Sound: The sound is nice and loud. Sometimes it's hard to hear orders when you're in a firefight, but thus is war. The sounds really compliment the gameplay well.
Suggestions: A more powerful regular DC-17. The ability to revive wookies would be nice! Definetly need co-op. All is good though. No major problems.

Overall: You are the leader of Delta Squad and must command your squad on the planet Geonosis and battle the bugs and battledroids.
Gameplay: Controller config is set very well. Being able to control your squad and position them into places for sniping, blasting and whatever else is needed is fun. You can do it yourself or have one of your squad members do it for you. Loading time isnt too bad and keeps the game flowing. Played briefly online and it was a bit glitchy if someone has a bad connection. Other than that online play was nice.
Graphics: 480p, what more can I say! Playing on 55in Mits WS is awesome. Background and character design is very good. Movement of your squad members is excellent. Maybe next installment on Xbox2 u can bump it up to 1080i, would make me very happy!
Sound: 5.1 again, what more can I say. Mixing the flow of background sounds along with the character voices go together nicely. Alot of fine detail but into the sounds.
Suggestions: Co-op play on this would have been an added bonus, I dont know why this was not included. Patch the online play to kick off those with horrible connections, makes for very bad game play when you dont know who has the bad connection. Would be nice to be able to pick up the alien weapons and use them. All in all a very good game and a must for those who enjoy SW games.