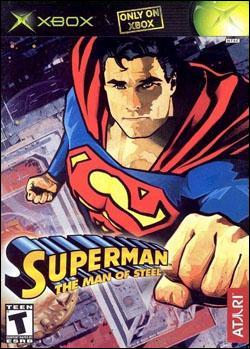 Superman, the world's greatest super hero faces his biggest challenge ever! Back for vengeance and determined to control Metropolis, super villain Brainiac 13 has unleased a relentless army of robotic drones that destroy everything in their paths. Superman's archnemesis Lex Luthor has designs of his own, and plans to use Brainiac 13's technology in his own bid for world domination. Are you up to the task of saving the planet?
Be Invincible:
After pausing the game press rapidly: Black, White, Left Trigger, X, Left Trigger, White. A explosion signals correct code entry.

Overall: The most appealing thing about this game is the cover art on the box. It should be called Superman:The Man of Sh*t.
Gameplay: The controls in this game are terrible. The action is unoriginal and repetetive. There is no interaction whatsoever with the enviroment around you.
Graphics: The best looking thing about this game is the way Superman's cape flaps around when he moves. I'm serious.
Sound: The score is forgetable. The voice acting is corny. However if you want to you can burn your own soundtrack so you can feel like you somehow contributed to this god-awful game.
Suggestions: Dear god, do not do what I did and waste your hard-earned money on this title. If you don't believe me at least rent it first! I turned around three days later and sold it at the mall for half of what I paid.

Overall: FREAKING AWESOME AND AMAZING! IF You can't figure out the controls of this game.. the controller is too big for your hands.. go back to a game cube!! ya bunch of freakin mary's!
Gameplay: This Game has so much going for it. Givin it takes a bit to get use too. (5 minutes) then you really start to get into the game... and it just bottom line becomes amazing!
Graphics: The Graphics were just Amazing. Its really how it says on the poster "it is as close as you can to becoming him" ITS TRUE!
Sound: The Sound Followed the Superman Themes Pretty well. So really it did me good! Just a down right kick @$$ game!
Suggestions: LONGER! MORE MORE GIMME GIMME!

Overall: Being a Superman fanatic, the fact that
this game stays true to the current comic
books is unfathomably awe-inspiring.
Seeing all these things I relate with so
much in the comics rendered so well in
such a specific stylization truthful to it's
source material is impecable. The
gameplay is definately fun the missions
may be short and the game may be short
in general, but this is made up for in
every other aspect of this game, the
locales are beautiful and all the
character models are very comic book-
specific, and the different costumes
unlocked are a treat to be allowed to play
with. It's an Action game with a good
story and great visuals with the voice
acting being yes very corny but
somehow appropriate, the sound effects
are okay and the original music may
leave something to be desired but it
allows you to change the soundtrack so
you can simply import John Williams's
score for the first Superman film into your
X-Box and then just use that. Overall
there should be no Superman or even
comic book enthusiast who shouldn't
own this game.
Gameplay: Very easy to deal with flying engine and
very solid maylay combat due to the
targeting system hence making tracking
normally sporadic and hectic flying
enemies easier to deal with and follow.

Graphics: Simply Gorgeous. As stated earlier, the
truth to its source material and beautiful
locales make it perfect for the comic book
fan.

Sound: If using the default soundtrack you wont
get the unbelievable feeling of true
Superman-ness that you would by simply
Importing John Williams's score for the
first Superman film. The games sound
effects are decent.
Suggestions: Maybe make the game longer, a bit more
attention to the sound effects perhaps,
and just if possible more easter eggs for
us comic book geeks.