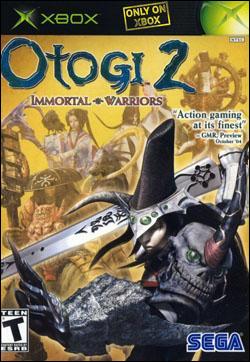 Otogi 2 is set in Japan and steeped in real-life folklore and mysticism. Raikoh, the famed undead warrior, managed to temporarily save the Japanese population from an onslaught of demons, but had not been able to vanquish them all before returning to his grave. The demons have now regrouped from hiding places within the sacred capital of Japan, and they are ready to attempt to take dominion over man once more. In response, five brave warriors ritualistically take their own lives to resurrect Raikoh. By fulfilling the ritual, Raikoh rises again and the five warriors rise with him, all set to take on the encroaching demon spawn as a team.
Score: 70
Overall User Average: 7.00 / 10 (70.0%)
Gameplay User Average: 7.50 / 10
Graphics User Average: 7.50 / 10
Sound User Average: 6.50 / 10

Overall: A great experience that challenge you from the start to finish. With new playable characters and totally new engine that make you go wow for a little while.
Gameplay: Like the first one, you control one of the six characters, including Raiko from the first game, to banish the demons that unleash on earth once again. Now this time, your weapons are very limited since you can unlock somes for each character. You start the game with Seimei, a fortune teller that fight with two magical fans but after that you can choose which want you want in later missions. What is different from the game it's now, you can choose what level you want to go first rather than playing linear all the way. Each time you enter a stage, you have limited time cause your health constanly going down, so much quickly fulfilled the objectifs of the stage as fast as you can. The stages are varied and sometime is very intense.
Graphics: The visual is spectacular in some way. The water effects that move away when you get into it, just looking so real.
Sound: Well, music a japanese-themed so if you like japanese then you like it. When you have great battle with some bosses, there are always fun to hear somes of them.
Suggestions: Another one with better graphics, new characters, a lot a weapons to collect and armors also, the stage must be longer.

Overall: Overall this game was really boring. Had crappy gameplay and didnt even have good graphics to make up for it
Gameplay: Slow... very slow gameplay. Doesn't really take much skill to just tap a couple buttons and jump around. Was neat to have unlimited abilities but wasn't enough. It was cool how you could smash anything in site though.
Graphics: Visually it was hurtin. The characters were designed nicely but the graphics looked like somethin PS1 would produce.
Sound: Meh... that's all i can say. Voice overs were decent but other than that there was nothing exciting.

Otogi 2 Q & A Plus Movie
Gamespot had the chance to sit down Otogi 2's producer and ask a few questions, see what he had to say.