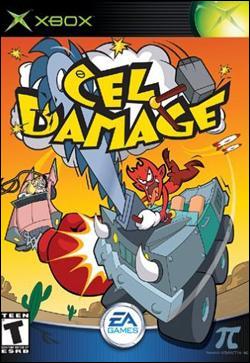 What happens when you mix the speed of Quake, the graphical look of Jet Grind Radio, the wacked out variety of vehicles in Twisted Metal, and the craziness of a Warner Brothers cartoon? Well...Cel Damage of course!!

Q: Thank you for taking the time to talk to us about your upcoming game Cel Damage . Can you tell us a bit about Pseudo Interactive, yourself and what you do there?

A: Pseudo Interactive was formed over four years ago by programming prodigy, David Wu and two talented associates from the University of Toronto, Rich Hilmer and Daniel Posner. These three showed a very promising combat/driving simulation at GDC a few years ago, and Pseudo Interactive immediately piqued the interest of Microsoft's game division. The rest, as they say, is history…we are about to publish our first Xbox game through Electronic Arts. My name is Kevin Barrett and as Project Director I just make sure everyone is heading in the right direction.

Q: Being from Canada, have you find it hard to break into the console gaming market? And if so why?

A: While it would have been more difficult in the past, the times are changing. The Xbox team has set a precedent in their attitude towards developers. People like Seamus are on the lookout for great game play, innovation and talented developers. They care little about corporate politics or geographic location.

Q: What type of game play can we expect from Cel Damage?

A: Cel Damage focuses on car combat in a fully actualized cartoon universe. The gameplay is fast, violent and really quite fun. We have three modes of play: Smack Attack (deathmatch), Gate Relay (race) and Flag Rally (collect and deliver four flags to the winner's circle).

Q: What special features are going to set this title apart from the rest?

A: Wow, a short question with a long answer. Here's a Reader's Digest version. Soft body physics: this is the best physics engine developed so far to simulate free-roaming cartoon dynamics. Cars bend, stretch, squish and re-inflate procedurally through the game engine, not through canned animations. Lots of weapons: from Whaling Harpoons and Buzz Saw Blades, to Broadside Cannons and Sledgehammers. The weapon effects: we procedurally slice car meshes with cutting weapons, we flame and cinder vehicles with burning gags and when a car gets crushed by a boulder, the actual mesh is pancaked. It's very advanced stuff. Speed: the game is very fast and the action is intense. The look: our art direction and rendering technology is top-notch. The cel-shaded levels, cars and characters look great.

Q: What cartoon themes are inspiring the animation style for Cell Damage?

A: Our game levels are placed in four major cartoon themes: Desert, Jungle, Transylvania and Space. We draw heavily from several animation traditions for the look.

Q: Since Cel Damage is "imitating" a cartoon-like feel in a 3D environment, how hard was this process to pull off?

A: Our Technology Lead, David Wu, would probably say it was easy, but I can guarantee it wasn't. From the technology perspective, Cel Damage is a breakthrough game on several fronts.

Q: The characters we've seen have been quite a diverse group. Can you shed some light on the six that are available and their vehicles as well?

A: Violet is our "Tank Girl". She's an anime-based troublemaker who drives a big APC that mounts a fantastic long-range mortar. Sinder is a little devil who got kicked out of Hell for being too chaotic. He winds up on Cel Damage driving a tight-maneuvering Hummer. His personal weapon is a hilarious woodchipper, making him a deadly close combat specialist. Dominique Trix is our game's sexy femme fatale. She's got a great pink caddy and her personal weapon is a hood-mounted crossbow. A stick of dynamite is strapped to each bolt, so you really don't want to be hit by that thing. B.T. Bruno is an Elvis-impersonating construction worker who drives a big bulldozer. His personal weapon is a sledgehammer that smashes other cars into wafer-thin scrap heaps. Fowl Mouth is a '30s black and white cartoon gangster duck. He drives a Studebaker and his personal weapon is a wild Tommy gun that sprays bullets all over the place. It's a great medium-close range weapon. Finally, the last main cast member is Flemming , our pencil-necked geek. He drives an awesome hovercraft with great speed and turning characteristics. His personal weapon is a set of laser cannons. When targets are hit, they burst into flames and turn to ash in a very satisfying way.

Q: What type of control scheme is Cel Damage incorporating? And how will the targeting system work on the controller?

A: Cel Damage has a very simple control layout. Right trigger: gas. Left trigger: brake/reverse. Left stick: steering. A Button: fire primary weapon. B button: fire power-up weapon. Targeting is taken care of by each weapon. The weapon selects its own target in order to add to the "fire and forget" nature of the game's combat.

Q: With 36 unique weapons at the players disposal, how varied are the weaponry as far as effectiveness and usability? Will there be weapons that require more skill than others to use?

A: Each weapon and power-up shines in its own way, and most are very easy to use. After some practice, players will get the hang of what they can do with the giant spring, or how best to avoid a tracking missile. Discovering what you can do with the weapons is part of the fun of the game.

Q: Are there any environment hazards to the levels?

A: Sure. We have a 100 ton weight, a roll-up bridge, a teetering haycart, flame jets, a bouncing spider web and plenty of other stuff. Not every gag is hazardous. Some will help you achieve your event objectives.

Q: Last question: How far along in development is Cel Damage?

A: We are just about done and plan to have our game available for the Xbox launch window.