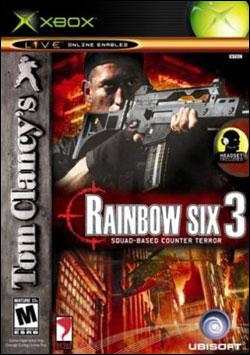 It used to be called 'Raven Shield', but now it is now called 'Rainbow Six 3'. Around XboxAddict.com we like to call it 'really friggin cool'! We had the chance to interview Chadi Lebbos, the producer of Rainbow Six 3 for the Xbox, and can now give you the lowdown on UbiSoft's next Xbox blockbuster.

A: When we decided to do Rainbow Six 3 on console, we wanted to give the player a genuine console game play experience. Rainbow Six 3 is a new game and not a port from the PC version thus the first reason for the name change from Rainbow Six 3: Raven Shield, to simply Rainbow Six 3. The second reason being that Raven Shield was part of the PC story line, and now we have something completely new. I cannot talk about the storyline yet as we are currently in discussion with the Clancy team :) Let me start by saying that the XBOX version is more action-oriented without compromising the tactical aspect of the license. With this game, our main goal is to make the player feel that he is a HERO. That is why Rainbow Six 3 has one team of four operatives, led by the gamer. I cannot speak of the team without specifying that they will be enhanced visually in many ways - looks, animations, AI personalities, and even their own voices. The team is : Ding Chavez (US) played by the gamer, Louis Loiselle (French), Dieter Weber (German) and Eddy Price (English). The other thing that the player will notice when playing the game will be the enhanced graphics. The reason behind this being that we are using some of the components of the Splinter Cell graphic engine. Therefore the use of Dynamic Lighting, Soft bodies, interactive environment etc... are used in the maps, which makes the environments more immersive than ever.

A: Many elements make these two games quite different from one another. To start off, Rainbow Six is an international anti-terrorist unit while the Ghosts are a US based infantry unit. Which means, different missions, objectives, and circumstances for intervention, etc. But there are also many more differences between the two ranging from game design to level design. Rainbow Six is more of a CQB game (Close Quarter Battle). Players must carefully plan their attack before going into the mission and have to coordinate their teams to perfection. The action is usually swift and precise and concentrated in smaller locations and indoor environments. The Rainbow Six unit is usually the last resort in solving difficult and delicate situations where terrorists and often hostages are involved. Ghost Recon is much more an open space game with larger areas and outdoor environments. The player generally needs to cover large areas before reaching its objectives. The Ghosts are usually one of the first unit to be called upon in dangerous situations. While the gameplay may offer a similar approach, both games require team-based actions and calculated methods. So basically, both games offer tactical gameplay, but with a different approach.

Q: Tom Clancy has always been a very popular author in the fictional and nonfiction worlds of military combat. I'm sure many people, including me, wonder exactly what role Clancy plays in the production of one of his signature games?

A: Every game carrying the Tom Clancy name has to respect certain elements to make it a part of this Clancy-esque universe. So basically, we follow guidelines for game content and storyline, which then, has to be approved by Clancy's people to make sure that the game is in line with the quality and style of his work. For each decision made during development, we always need to keep in mind if "this fit with the whole Clancy Universe and the previous Rainbow Six titles?" and so on.

Q: Some of our staff had the pleasure of viewing Rainbow Six 3 at e3 this year and were very impressed. One of our favorite features was the 'on the fly'mission planning instead of a pre-mission briefing. Could you give our readers a little more in depth explanation of how it works?

A: We wanted the player to get right in the action. So basically, starting a game, you get to equip your operative, while the others are ready roll, and by simply pressing one button, you'll jump quickly in the game. You don't have to waste time in the menus reading on mission briefings, they are given to you in game by Team RAINBOW group commander John Clark. Once out there, Clark will give you a specific objective to accomplish, replacing the previous Control room. Complete that objective and Clark will give you more orders. The beauty of this is that it gives us the liberty of changing the planning on the GO, which means for example that the objective is rescue the hostage, and once you get to the location of that hostage, the players finds out that he has been killed, so another objective derives for that situation and so on...

Q: Raven Shield on the PC touted a very formidable arsenal of 57 different weapons; will we see all these weapons in Rainbow Six 3?

A: In the PC version, when you equipped your team, you could have geared them up with 9 possibilities. That is too much for a console version, so what we have done is give the player 30 guns that all are ready and geared up for battle, therefore you can have an M4 already equipped with a reflex site (new gadget, precision dot, help you aim), or have an MP5SD5 with a mini scope and a sound suppressor etc... With all this the player will also be able to equip himself with a grenade launcher that can fire 4 different types of grenades : frag, high explosive, Red phosphorus that ignite terrorists on fire (see them run, on fire, screaming in pain before hitting the floor face down, dead.), and tear gas. We also added a new stand alone grenade- a white phosphorus grenade. And let us not forget that terrorists can throw cocktail Molotov at you, setting you and your team on fire!

Q: What were the advantages to using the Unreal engine over the old Rainbow Six engine?

A: The biggest advantage Unreal brings to Rainbow Six 3 is a solid code base in miscellaneous fields. Instead of programming graphics primitives and rendering subroutines, it allowed programmers to focus on other features and special effects from the beginning of the project. It is allowing us to be able to create an awesome game in a relatively short period of time. On the other hand, we needed to modify it heavily on many points. We added stuff to the renderer tools (combined with the Splinter Cell graphic features) and implemented the very specific AI needed in a game like Tom Clancy's Rainbow Six 3. For the sound, we plugged an internal sound engine. I really think that we'd modified at least 70% of the code. So basically, the engine is very powerful and it helped us a lot in creating the game... but of course, it required a lot of tweaking to make things possible.

Q: Will the change of engines be apparent to people who go from playing Ghost Recon to this game?

A: Ghost Recon and Rainbow Six 3 are using 2 different engines. So yes, the difference is obviously apparent.

Q: Ubi Soft gave us our first 1080i game, Dragon's Lair 3D. Will Rainbow Six 3 support HD resolutions of 720p and/or 1080i and if not was there any testing done at that resolution?

Q: Speaking of Ghost Recon, Ghost Recon for the Xbox has been one of the Corner stones of Xbox Live drawing in mass amounts of support from the XBL community. How do you see Rainbow Six 3 performing in the online world? Is there the potential that it will kill off ghost recon by pulling support away from it?

A: Rainbow Six 3 will be outstanding in the on-line world. XBOX Live Support up to 16 players, 9 multiplayer maps, downloadable content for on going community support, voice communication, Statistics and a new multiplayer mode ;). I personally think the players will enjoy both Ghost Recon and Rainbow Six 3, as they each offer a different gaming experience.

Q: Some people complained that Ghost Recon focused too much on the online aspect of the game and left single-player gamers wanting for more, which means a lot of people will probably be keeping a close eye on the single player side of Rainbow Six 3. What is Rainbow Six 3 going to be able to offer them?

A: With 14 intense single player maps full of heart pounding tactical action, the single player fans will have it all. Give orders to your teams via the game pad with the quick order interface, issue a Zulu code on one door while you go to another door and wait for the correct moment to issue the order. If you don't want to use the controller to issue the orders, well guess what? Take your Xbox communicator head set, and issue the order " Open on Zulu" . Be in control, live the action, be the leader of the famous team. With 9 multiplayer maps, coop and adversarial, Rainbow Six 3 will be able to please both gamers that love playing single player and those that are just up for some XBOX Live action! (-:

Q: For Raven Shield on the PC, you have modders making maps left and right including some professional designers adding their custom maps. Will we see any custom maps like these become available for download through XBL?

A: I can answer this question by saying yes we will - stay tuned for more details. (-:

Q: Is there anything else you'd be willing to share with an extremely anxious Xbox crowd that wants to know more about this game?

A: The crowd, as you call it, will experience the Best and Most Thrilling Tactical Shooter on XBOX. More emotions, with terrorists reacting when being hit (go for cover, escape etc..), more dialogue during game play from teammates and terrorists, more intense firefights, more visual feedback & effects - for example: camera effect: explosion effect, ground shake, getting shot, grenade effects. Also get ready for amazing visual and sound experiences that will keep you nailed to your couch!

Q: Lastly, and I don't mean to draw attention away from Rainbow Six 3, but Ubi Soft has quickly become one of our favorite Xbox developers by delivering title upon title of sheer quality and playability. Any chance you can let us in on what else is in your Xbox lineup?

A: He He I was waiting for a question like this (-: . Guess what the answer is : OF COURSE ! The next game that we will be working on is called *lol you really thought I was going to give it!!!" (-: /salute