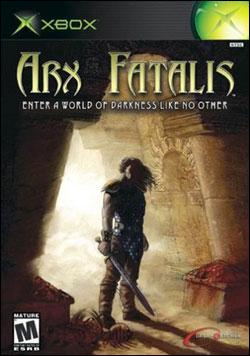 Arx Fatalis is a first-person RPG, which plunges the player into an amazingly complex fantasy world. Arx Fatalis combines intelligent storyline with impressive medieval surroundings. We caught up with Julien Roby, Associate Producer at Arkane Studios to chat a bit about Arx Fatalis for the XBOX.


Q: All of us here at Xbox Addict would like to thank you for taking the time out of your busy schedule to answer a few questions for our readers. Could you give us a little information on who you are and your role on Arx Fatalis?

Q: For those readers who are unfamiliar; could you please give us a quick back-story on the game?

A: The game takes place in an old fantasy kingdom called Arx, where the sun has died many years ago. Allow me to quote an actual sentence from the game intro itself, as it provides a good answer to your question: "In the fatal year of 226, our sun began to fall into decline and an eternal winter fell upon our world... His Majesty Lunshire, noble son of Poxsellis, decided to move the whole city of Arx underground, into one of the dwarves' abandoned mines. Not just humans, but dwarves, trolls and goblins all worked together for their common survival. All the races finally built their homes in this new underground setting. But today, evil is knocking at the gates..."

Q: Many know that Arx Fatalis has already been released for the PC, but is it console exclusive to the Xbox?

A: Yes. Arx Fatalis will be released ONLY on Xbox.

Q: If so, what made you choose the Xbox over the other platforms?

A: Due to its great power and Hard-disk capacity, the XBOX was the obvious choice for us to develop Arx Fatalis on for console.

Q: Will the Xbox version differ from that of its PC counterpart?

A: The XBOX Version is a straight port of the PC version. It will feature everything the PC version features. But it will be a polished version. We’ve paid a lot of attention to PC gamers’ feedback and we’ve changed some gameplay elements according to their comments. Also we’ve redone the interface from scratch to make it more user-friendly.

Q: Xbox offers a chance to create a game and retain comparable resolution compared to their PC counterparts. Do you plan on utilizing the Xbox’s higher resolutions for HDTV gamers?

Q: The PC version of Arx was very well presented in the texture area as the graphics really helped set the mood for the game and the locations. Any revamping of the levels to utilize the Xbox hardware?

A: We’ve used the XBOX pixel shaders in order to get a better water render in the game but globally graphics are the same as on the PC version. You’ll still see tons of different & nice looking textures which create a realistic environment.

Q: How will the control scheme be laid out for the Xbox version?

Q: How much customization will you have of your character?

A: At the beginning of your quest you’ll have to create your character. To do so you’ll have to distribute skill points in nine skills + 4 attributes. This skill will allow you to perform many actions through your quest, such as poisoning your weapons, brewing potions, enchanting items, lock-picking doors etc... You’re also able to choose your character face. During your quest you’ll earn XP points. Thanks to them you’ll be able to gain more skill points to develop your character as you want. There is no class system, so you can start with a “warrior” oriented character and then you can choose to become more of a “thief-like” hero.

Q: What brought about the decision to make the game in the first person perspective, rather than the traditional third?

A: Indeed Arx Fatalis is a 1st Person game. This feature is important and it gives a great immersion feeling to the player. Playing through the eyes of your avatar allows you to really feel like being in the arx world. You can see your feet when walking, you can hear foot-steps on your right, a door opening far on your left… We have a complex 3D sound system, using Dolby Digital, and combined with the 1st person perspective, it really creates an oppressing atmosphere.

Q: How would you describe the environment? Is it more of an outdoor type environment or is centered more on the dungeons?

A: The environment is more of an underground kingdom but it doesn’t mean there are only brown dungeons. The world of Arx is made of different cultures: you’ll visit the vast human city, the temple of the snake women or even the dwarven forge. Wild areas are made of dark caves, vast lava openings, mushroom forests, crystal caves, snowy caves... Each stone from the world of Arx has been handcrafted and we’ve paid a lot of effort to make every location unique.

Q: The magic system has been deemed unique from that of a traditional RPG. Could you explain a little about it?

A: Magic is based on two things in Arx Fatalis. On your skill and on runes you've found. One of your character skills is "Magic Skill." Whatever your magic skill is, you can cast all the spells. However, the success level of this spell depends on your magic skill. For instance you can cast "Summon Demon" with a low magic skill. But there is a big probability you'll get a chicken instead... The second important thing in Arx Fatalis when talking about Magic is the rune system. In the game you will find rune stones. Each rune stone means something. For instance "AAM" means "Create" and "YOK" means "Fire." So if you combine the power of these two runes you will get the spell "AAM YOK" or "Create Fire." As each spell is done by a sequence that means something, you will be able to find new and secret spells if you find a rune sequence that means something. For instance, if you find the rune "TAAR" which means "Projectile" you can add it to the sequence "AAM TAAR" to get "AAM YOK TAAR" or "Create Fire Projectile." When you know a spell sequence, then you have to cast the spell. To do so, you will have to draw each rune of the spells directly on your TV screen with your Xbox pad, as if you were a real wizard. We use the Xbox directional pad to draw the shape of each rune. There is one combo for each rune, corresponding to the rune drawing. For instance the rune YOK which looks like a U is drawn by the combo Down, Right, Up. You can also pre-cast up to five spells to be able to cast them directly during fights.

Q: Will there be a noticeable switch between night and day?

A: No. Nevertheless the world of Arx will change a lot during your quest. Come back in the troll area and you’ll see a goblin fishing while he was not here previously. Come back in the human city: the shop is closed and the merchant is in his home getting some rest. The world of Arx Fatalis is very dynamic and there is always something new to see.

Q: A thing I know many people have been dying for is an online RPG. Is there any chance this game could be Xbox Live compatible?

Q: How much game time will the average gamer be looking forward to in Arx?

A: The average time to finish the game is around 50+ hours if you want to see everything. Indeed the game features various routes of gameplay and it’s hard to play them all during your first play through the game, as some of these paths are linked to your skills. So you can replay the game choosing different skills and try different things. For instance, instead of warrior oriented skills, choose the stealth way to play with the lights and the shadows to sneak in dangerous locations, making sure your footsteps won’t be heard by your enemy and reach secret locations. Or maybe you’d like to choose to increase your object knowledge skill to discover the hidden power of magic items... Also, as the result of many of your actions depends on your skill, you won’t solve your problems doing the same thing. One problem in the game always has different ways to be solved. Steal an item instead of doing a quest to get it, pick the lock on a door to find a way to rob the bank, triggering a secret quest etc... Also, the player can try to play the game doing his quest following a different order. The game features five different endings depending on the way you have deal with people during your quest. There are also some sub-quests the player can do and many secrets to be found while exploring the different locations. In fact we give a direction to follow to the player but, at any time during his quest, he can jump off from the "wagon" and do his own things. We had a hard time making the game “finishable” even if you've killed every NPC from the game. So when you replay the game you can really try different things and see how the game reacts.