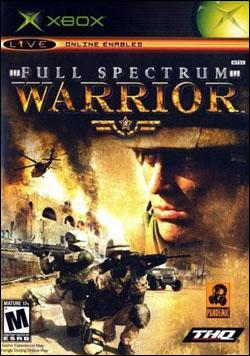 We have a couple of words with Wil Stahl, Director at Pandemic Studios about their upcoming, E3 sensation, tactical military title.


Q: Between Conflict Desert Storm and Ghost Recon, the Xbox has a pretty strong fan base for tactical military games. What do you think will set Full Spectrum Warrior apart from them?

A: Just about everything really :) Other than the subject matter, FSW is a completely different kind of gaming experience.

Q: Full Spectrum Warrior seems it would be perfect for Xbox Live. Will it be playable online? If so, what kind of game types can we expect?

A: We are supporting a cooperative mode where two players can play together through the single-player campaign. If you like playing a game as a team, you’ll really like the cooperative play. It absolutely requires that you cooperate with your teammate to succeed. We are also supporting downloadable content, although the extent is still being worked out. We’re also talking with Microsoft about getting some other cool Live support in the game.

Q: Did the programmers have to get military advice to create this game?

A: The programmers didn’t but I sure did. During the early design phase of the Army version of FSW, we worked extensively with Army captains and sergeants to insure that the game accurately reflected their experience in a war-zone.

Q: Is it true that this game is being used as a tactical command simulator for the U.S. Army?

A: Yes and no. The retail version of FSW is based on the same technology as the Army version; however, they are different games. The Army version (the one the Army is using as a training aid) is very much a simulation – part game, part tool. The retail version is a true game. Although on the surface the games look very similar, there are many subtle differences between the two.

Q: If so, how much of a difference is there between what the simulator is, and what the console game will be?

A: From my perspective, the differences are great. In the retail version, we were able to make some abstractions and tweak certain systems to make the experience more “FUN” as opposed to more “realistic” (as was the case with the Army version). This doesn’t mean that the retail version is less realistic, only that it is more fun (if that makes any sense).

Q: Is this game based only on one conflict, such as the Iraqi war, or are their different theaters of operations?

A: Full Spectrum Warrior takes place in a fictitious country and focuses on the experiences of Army soldiers during the course of a single day. We wanted the retail version of FSW to be as authentic as possible. Because we are simulating light infantry, we couldn’t have the squad bouncing around the globe fighting terrorists – that’s just not something light infantry does. FSW will give players a window into how an Army squad operates as part of a larger coalition of forces at war.

Q: Just how realistic is this game anyway? Will there be a learning curve for basic gamers, or is this game aimed at the veteran gamer types?

A: The game is the most realistic representation of Army doctrine I know of. Players will have to use the same tactics an Army squad actually uses in the field to capture terrain. These include things like suppressing, flanking and ambushing. There may be a slight learning curve for some players – even veteran gamers. This does not mean, however, that the game is not accessible to casual gamers at all; in fact, I would say the game is much more accessible than most other squad-based games on the market today. The game includes an extensive series of training missions that will get anyone quickly up to speed on Army tactics and how to apply them within the game.

Q: How much time went into creating this game?

A: If you include the development of the Army version, the FSW team is entering its fourth year on this project. Needless to say, we are eager to get it finished and into the hands of everyone.

Q: Why was the game made to be a command and control type of game as opposed to a true first person shooter?

A: When the Army approached us to make the game they had only a few requirements really. One of those was that any skill the player learned in the game had to have the greatest chance of being carried over into the real world. This made sense from their perspective because then they would be getting the most bang for the buck. Right away it occurred to us that firing a gun in a video game has absolutely no real-world equivalent. If anyone thinks they can fire a real AK-47 because they’ve fired one in a game they are in for a real surprise :) Commanding soldiers; ascertaining good cover from bad; managing fields of fire; these are all thing real squad leaders do that we felt we could simulate very accurately. But it required us to really rethink what a squad-base gaming experience could be on a console.

Q: Do you think that this will put off the average gamer that it's not an actual FPS game like Ghost Recon?

A: I really hope not. My biggest concern is that people won’t even give FSW a chance simply because they have a pre-conceived notion of what it is without actually playing it. FSW is not Ghost Recon with the shooting taken out, nor is it WarCraft from down on the ground. It is its own kind of game. FPS games are my favorite kinds of games. The same is true for many members of my team, and we think we have created a game that will appeal to them as well as all other kinds of gamers.

Q: How accurate are the missions. Are they real life conflict zones with current event threats, or are they fictitious enemies?

A: We’ve created a fictitious city in which the game is taking place. There are many reasons why we decided to do this. One of the more important reasons was that we didn’t want to seem like we were “cashing in” on current events. We also wanted to be respectful to all the soldiers currently fighting in real world locations – many of them are our friends.

Q: What did you do to ensure the authenticity of the weapons?

A: All of our weapons are modeled after specifications provided to us by the Army.

Q: Speaking of which, and for the benefit of the gamers, what kind of weapons and equipment will the gamer get to use?

A: Your light infantry squad will be composed of two teams of four soldiers. Each team will have a team leader, an automatic rifleman, a grenadier and a rifleman. The team leader is usually the highest-ranking member of the team. The automatic rifleman is trained to use the M249 SAW – which is the high-casualty producing weapon. The grenadier carries the M4 with the 203 grenade-launcher mounted underneath. Both the rifleman and the team leader carry the standard M4 assault rifle. Each team is usually equipped with both fragmentation and white phosphorous grenades. The team leader will carry a radio and a GPS (Global Positioning System).

Q: How would you describe this game: A simulation, or action game?

A: Given those two choices I’d have to say action game. We call it a “tactical action” game; it plays like a strategy game but feels like an action game.

Q: Would you agree with the statement that this game could actually raise the bar for military games in the future?

A: If you want to make that statement I’ll agree with it :)

Q: Here's the chance to brag about Full Spectrum Warrior. What does this game have that other military games don't?

A: If I had to go with one thing it would be authenticity.

Q: Why the Xbox? Did you find the Xbox a good console to create such an expansive game on?

A: The Army chose the platform.

Q: What kind of squad commands will be have at our disposal. Or relabeled as: How deep is the squad command in this game.

A: There are several basic orders you can give, most relating to movement and firing priorities. The depth comes in how the player combines the basic orders to create more complex attack and defense plans using both teams at the same time.

Q: How much interaction do we get with our squad.

A: You interact with the squad as their leader. Most interaction is at the team level but you do have the ability to order individual soldiers to cover different sectors.

Q: Do we get to change out members? Do they stick with us though out the game?

A: You do not change out the members of your team. The same eight soldiers travel with you throughout the game. A squad leader is often in charge of the same group of men for months. All the soldiers under your command will reflect the bond that is created under such circumstances.

Q: What will happen if you loose a soldier? Is there impact throughout the squad?

A: Yes. These soldiers have all been together, fighting with each other for many months. When one of them goes down, getting him out alive becomes one of your primary objectives, just as in real war. The Army leaves no man behind and we’ve tried to reflect that motto in the game.

Q: Where's the AI level at? What kind of AI on both sides will we see?

A: The AI is coming together nicely. The soldiers can form up and seek cover. They share targets amongst their fellow teammates and move intelligently, always trying to stay out of the lines of fire of other friendly units. The enemy AI is every bit as capable as the soldiers, but they are less organized in general.

Q: What defines the AI for your squad?

A: The AI was created to reflect trained soldiers.

Q: Is this game going to have staying power? Are we going to see sequels?

A: I hope so. It’s been a long and challenging road making this game. We’re doing many things that have never been done before which is both incredibly exciting and incredible terrifying at the same time. Everyone associated with the game – the team, Pandemic Studios and THQ – knew we were taking risks in trying to stay true to the original vision and in not trying to make the game more conventional. But we all believe in the game. A sequel would be a great reward for all the hard work and effort that’s gone into making FSW.