A new trailer of the racing game Mad Dash Racing can now be found at Eidos Interactive. The trailer shows some of the effects (like weapons) and environments. The size of the movie is 8MB and is in .mpg format. You can download the movie from the Eidos Products Page or from their FTP (use Save As...).
Source: http://www.xboxaddict.com/ 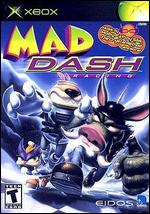