So, it’s video time, but first a bit about the game that you are going to watch.

Dead End Job sends you into a madcap, 90’s Ren & Stimpy-esque world to bust up ghosts. It’s a rougelike twin-stick shooter with buddy co-op that straps a vacuum pack to your back and puts a plasma blaster in your hand. For you, it’s just another day in the office.

Soon to be published by Headup forXbox One, Dead End Job is developed by Ant Workshop a Scotland-based studio founded by Tony Gowland. Gowland was previously at Rockstar Games as lead level designer for Red Dead Redemption, and worked on multiple games in the GTA franchise.

Ok, enough jibber-jabber, check out the video below: 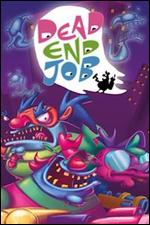