Activision is entering the world of modern vampire lore with the development of Blade 2 for the Xbox. Blade 2 is an all-new, non-stop action-adventure that allows players to take on the role of Marvel’s half-vampire, half-human Super Hero on a quest to save the human race. The game has not yet been rated by the ESRB and is scheduled for release in 2002.

Developed by UK-based developer Mucky Foot, Blade 2 lets players assume the role of Blade, the "baddest" of the vampire slayers. As Blade, players must make maximum use of his special abilities, weapons and martial arts moves to stop the vampire nation’s quest to create an all-new form of super-vampires known as Reapers.

The game’s revolutionary multi-directional fighting system will allow players to take on blood sucking enemies as they attack from all directions. Spectacular visual effects add to the game’s realism as vampire foes are obliterated.
Source: http://www.activision.com/ 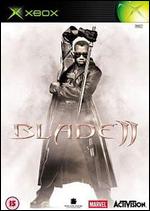