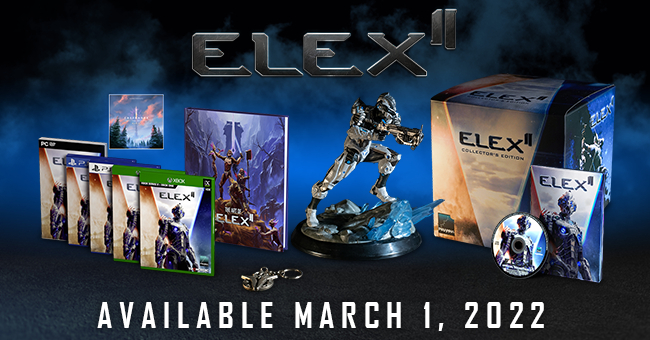 Magalan is in dire need of a hero. The factions are inches away from starting an open war, the world is still haunted by monsters of all different kinds and a new threat is rising, in an attempt to change the face of the planet forever - survival of mankind not included. That means it’s about time for you to return to Magalan, put on Jax’s boots, and kick some ass, when ELEX II, the science-fantasy RPG by Piranha Bytes releases on the 1st of March 2022 for PC and consoles.

ELEX II will feature a special Collector’s Edition, including:
The ELEX II Collector’s Edition has an SRP of $ 149.99 / € 149.99 / £ 139.99.
About ELEX II
ELEX II is the sequel to ELEX, the vintage open-world role-playing experience from the award-winning creators of the Gothic and Risen series, Piranha Bytes. ELEX II returns to the post-apocalyptic Science Fantasy world of Magalan, with massive environments that can be explored with unrivaled freedom via jetpack – you will be able to move through the epic story any way you want!

Several years after Jax defeated the Hybrid, a new threat arrives from the sky, unleashing the dangerous powers of dark Elex and endangering all life on the planet. In order to defend the peace on Magalan and the safety of his own family, Jax embarks on a mission to convince the factions to unite against the invaders, as well as a personal quest to find his son, Dex, who got separated from him …

The game allows you to: