SAN RAFAEL, Calif. -- February 28, 2002 -- LucasArts Entertainment Company LLC today announced its upcoming role playing game (RPG), Star Wars Knights of the Old Republic, will debut on the Xbox video game system this fall and release on PC early 2003. Developed by BioWare Corp., the dramatic game features an original story set some 4,000 years prior to the timeframe of the Star Wars films in an era dominated by an epic conflict between the Jedi and the evil Sith.

NOTE: Check out the fresh new Xbox and PC screenshots, click on "Product Profile" to check'em out!
Source: http://www.lucasarts.com/ 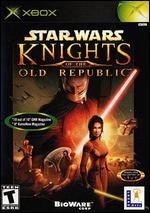