DreamCatcher Interactive Inc. today released three new gameplay videos for Painkiller: Hell Wars. Featuring cutting edge graphics and the advanced Havok physics engine, Painkiller offers fast-paced single-player battles with the denizens of Hell or players can take their game online for intense multiplayer action. The critically acclaimed first person shooter has gone gold for the Xbox and will be shipping to retail on July 25th. In Painkiller: Hell Wars, players acquire the identity of Daniel Garner, a man who died and is now stranded in purgatory with the sole mission of defeating Hell’s generals and reuniting with his loved one. In the dark and chaotic world of Painkiller, gamers are faced with the daunting task of overcoming an onslaught of more than 75 of Hell’s most heinous monsters. Left to fend for himself with an arsenal of deadly weapons and the unique ability to change into a powerful possessed creature, Daniel must eliminate unforeseen forces in over 20 terrifying levels and try to prevent the imminent unholy war.
Source: http://www.gamewire.com 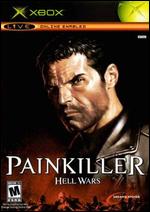