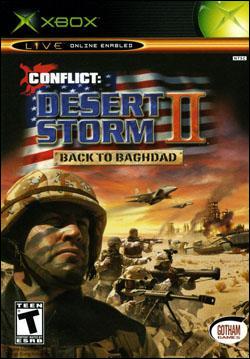 No rest for the weary. Our heroes from the first Desert Storm missions: Bradley ? Team Leader, Foley- Sniper, Connors-Heavy Weapons, Jones-Medic have been called into action once again."

read more
At the height of the 1991 Gulf War, 300 clicks into the heart of Iraq, you must command your squad of Special Forces operatives to strike at the evil Iraqi dictator's fascist regime. Advanced squad based combat with more levels, more weapons, smarter enemies and tougher squadmates than the original. The troops are in position, so lock and load, and get ready to go loud!
Cheat mode:
At the main menu, press L(x2), Right trigger(x2), X(x2), Y(x2), B(x2). The "Cheats" option will be available at the options menu during gameplay.

Overall: I have never played the first game and after playing this one I never will. Don't get me wrong it is a fun game but has little replay value. If you want a good war game then get GR 2.
Gameplay: The single player game is good, but it is difficult to aim your weapon, the controls are hard to master and controlling your team is difficult. I did like the way to call in air strikes though.
Graphics: The graphics are not up to par, you can really tell this is a PS2 ported game. The player animations look bad, especially when running, it looks like a robot running. The environments don't look bad, however they are difficult to go through them with no sense of where to go.
Sound: I don't like the weapon and bomb sounds at all, not at all realistic. The voice overs and helicopter sounds are not bad though.
Suggestions: Start from the ground up for the next one!

Overall: i am rating this game as a game, and that only... if i was to take into account the political and moral significance of the game i would be obliged to lower the rating... but as this is a game, i will rate it as that and that only... phew!! now that thats off my chest! conflict desert storm2 is a good game, and one of the earlier succesful entries into 3rd person playing, and commanding games... when it keeps to what it it does best it is good, but often gets caught up in it's minor, yet frequent flaws. a pity about the absence of live
Gameplay: a very definitive style of gameplay, the switching characters and commanding is very good, fine-tuned... and easy to pick up on... one dissapointment is the absence of live! play.
Graphics: visually sub-average, and relativly dissapointing... not impressive on a ps2... not acceptable on xbox
Sound: sound is average, explosions are okay... but environments could have soundded a bit more convincing.

Overall: I bought this game the day it came out and i loved it. It is an awesome game and is a worthy sequel. The live content download is a good feature because it makes the game last longer. I still play on the game now.
Gameplay: The gameplay is one of the best parts of desert storm 2. It has a good setting and a god storyline for you to follow. Story mode can take a lot of time to complete as the first one did. I have only just completed it a week ago. There is no slowdown at all on the game and the game engine copes well with the characters movment and gun firing. If desert storm 2 didnt have this good gameplay then it wouldnt survive in the games market.
Graphics: The visuals are definatly better than the first one, and the first one was quite amazing at the time. The detail on rocks and sand is quite impressive and the characters are quite realistic too.
The ragdoll affect is quite good aswell how when a person gets shot, they fly in the direction of the shot wounds force and they actually affect to it aswell. Graphics are a top aswell.
Sound: The sounds are just great. The best part is hearing your team mates yelling out their position and shouting when they are injured. It really makes you feel like you are actualy on a battlefield and you are the captain. The level affects are quite impressive too, for example when your plyer walks, especially on a surround sound, you can hear their feet making a sound in the sand. Good music aswell thanks to the custom soundtracks. You can still kill Iraquis to the sound of your own music. A definate upside to the game.
Suggestions: Not really any suggestions but i was expecting it to be online live capable and not just content download, still brilliant work!

Overall: I have always loved the Tom Clancy games, the Rainbow Six type ones
more than the newer Ghost Recon games, but I do like both series. I
found myself dissapointed with this addition to the Ghost Recon series. Ghost
Recon: Island Thunder is a decent game, but is too much like the
original for me to have fun with it.
Gameplay: The controls are all decent, a little hard to get complete control of
at first, but nicely laid out. Enough missions to play through, although
I haven't played them all, and the online capability is always something
good to have, but you can stick with the original Ghost Recon if you are
an Xbox Liver.
Graphics: The graphics are the best part of the game, the models are nice, and
the worlds are even nicer. The trees are great, the rain and just everything
in the environment is good. The blood is decent, and I love how baddies
react when they are shot. Good job on the graphics.
Sound: The sound is decent as well. The music keeps you into the game, but
I would have liked a custom soundtrack capability like the Conflict
Desert storm games. The gun noises are great like in all Tom Clancy games.
Suggestions: Quit while you're ahead, do not make another game until the next systems come out. The storyline hasn't grabbed me yet, get better writers.

Overall: This game is just like the first Conflict Desert Storm. That is all I can say. Some of the only things added to Conflict Desert Storm 2 are some new weapons, cinematics, ability to role to the side during prone position, Xbox Live downloadable content, and that is all i really noticed.
Gameplay: The gameplay doesnt get repetetive. When you are trying to gun down some rag-heads, a tank comes at you and makes it a lot more interesting.
Graphics: The graphics arent exactly the best, but they arent the worst. They are just basically the graphics that your on the first Conflict Desert Storm.
Sound: Excelent Sound, that is all I can say.