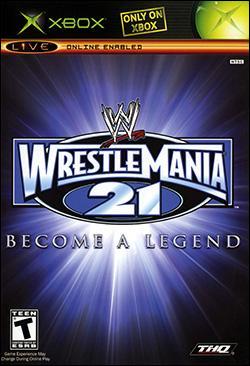 To say that I am a die hard pro wrestling fan would be an understatement. Ever since I was five (that was twenty-two years ago) I\'ve watched pro wrestling in one form or another. No, I don\'t have a John Cena poster or a Batista T-Shirt (although I do have some ECW merchandise and a nWo WCW hat), I\'m either glued in front of the television or using Tivo to make sure I don\'t miss an episode of Raw, Smackdown or any Pay Per View (including NWA TNA shows)."

read more
WrestleMania can define a legacy, and yours is about to be written. The greatest spectacle in sports-entertainment comes to Xbox with WWE WrestleMania 21. The WWE experience has never been more lifelike with Superstar voice-over and commentary, an all-new proreversal system and motion capture technology, making this the most realistic looking grappler to date. Create the ultimate Superstar and watch him evolve as you earn new move-sets, costumes and abilities in your quest for the WWE Heavyweight Championship. Build the perfect championship belt and defend it on Xbox Live while gaining prestige with each victory you claim, or take on four of your friends in head-to-head competition online. WrestleMania 21 will immortalize your legacy forever. How will you become a Legend?
Score: 59
Overall User Average: 6.17 / 10 (58.6%)
Gameplay User Average: 6.33 / 10
Graphics User Average: 8.67 / 10
Sound User Average: 7.33 / 10

Overall: Overall, the game was ok. Not the best crayon in the box but it's still a game you can enjoy. I still play from time to time because I get bored of some of my games and playing with your brothers makes the game more fun.
Gameplay: Gameplay is decent. I play a lot of wrestling games. I really enjoy my older games more. I just make the best out of these games because it's just fun playing games with friends, and especially with your brothers. It's Live enabled, never tried it. Not sure I want to?
Graphics: Graphics keep improving with more games coming out. The wrestlers look real, they shine, and show muscle. Entrances are upto date and look great as well.
Sound: Music on game is decent, Custom soundtrack is cool too. If you creat a wrestler it's cool to have a song (especially funny in some way) to throw on there as an entrance.
Suggestions: Improve in just about ever area and it would be great. Keep the Xbox Live stuff going too. Seems like a good idea. Never tried yet however.

Overall: Holy Shit!! How the hell could someone make a wrestling game so crap! I am a long time wrstling fan and have a PS2, X-Box and Gamecube and i get every wrestling game as soon as it comes out. I really expected more from THQ this time, I shouldnt have got my hopes up.It was only slightly better than Raw 2. Which isnt saying much. Someone must have been on Crack when they made this game. Please dont buy this game!!!! I have already taken it back!
Gameplay: The gameplay on this Game was quite shocking. It was hard to have a match that went loger than 3 minuites. If you give your opponent 2 bodyslams you should be able to pin them, And thats when its on hard. The controls were almost impossible for this game, The buttons clashed and you find yourself doing something you didnt want to do, there isnt a very big selection of moves. Another thing that pisses me off in this game is that in exhibition they have a horrible selection of match types. No Elimination chamber, No elimenation matches, No First Blood Matches, No I quit matches and in the stipulations matches, you can only play one on one matches. For Example if you want to do a triple threat hardcore match; YOU CANT, If you ant to do a fatal four-way hell in a cell; YOU CANT, If you want to do a tag team ladder match; YOU CANT!!!! So basically when you finish season mode you have nothing to do! speaking of season mode, It is the only decent thing in this game while it lasted. I finished it in 2 days and i only played for a few hours each time. But it is fun, the voice overs are impressive and so are the graphics I will give it that. But over all gameplay is pretty BAD!
Graphics: Alright.... The graphics in this game are impressive. In one of the scenes in season mode that really blew me away was when Evolution beat the crap out of me, It was the best thing i had seen in a wrestling game for a while. BUT you dont buy a game for its graphics do you.
Sound: I hate the song in this game! i am so sick of them. They are the same songs from Dayof reckoning and Smackdown V.S Raw. They are some of the most irratating songs i have ever heard. But the voice overs are great. i really enjoyed hearing there voices but wait untill the wrestlers see what there voices were used for, This piece of crap.
Suggestions: Alright im guessing if you made this game you must be pretty freakin stupid so ill speak slowley. Please Could you just play other wrestling games for a while and get some ideas. Where were the cruiserweights? Where was the Elimination chamber? Why couldnt i play tag team matches with a stipulation. You have alot of work to do. So before you even think of making a Wrestlemania 22, Play Smackdown V.S Raw on PS2.

Overall: I had a chance to play this game a while both at a friends house and in-store. I used to be a huge fan of wrestling games (No Mercy mostly). The two other XBOX releases (Raw games) are terrible.. this one is about average. An improvment over Raw, but nothing has touched No Mercy to this date.
Gameplay: The grappling system is different than the Raw games, but it's still not THQs best (again, No Mercy). I wish they would just go back to exactly that.. but that's me dreaming. Limited options here which isn't good for a wrestling game.. but this could just be me grown out of the wrestling world.. maybe I just don't enjoy it as much as I used to.
Graphics: This game does feature pretty good graphics. Smooth animations (more realistic at that), good textures, and great intro sequences. This is the saving grace of the game, making it the best wrestling game on the XBOX.. but that still isn't saying much.
Sound: It's the same stuff you will hear in any wrestling game.. there isn't much to speak of here. It doesn't take much to add sound to a wrestling game.. so I'll just leave it as average. Nothing special at all. No problems at all.
Suggestions: Re-release No Mercy on the XBOX and I will play it more.

Overall: Well, after reading so many negative reviews I was unsure whether to buy this or not but after deciding to buy it it was a lot better than i thought.


Gameplay: The gameplay is a lot slower than SVR but is better due to this. It makes it much more realistic. The controls are fairly similar to SVR and there are more weapons than SVR which is great. Wrestlemania also features more blood. Bust up your opponent enough and it will stain clothes and flow down their body not just their face again making it more realistic.

Graphics: Lush. Obviously this is something that the game boasts about. Everything looks great, the arena, entrances, and wrestlers. There isn't much need to say anymore - the graphics are just brilliant.

Sound: The superstar voices are awesome. During the cutscenes the voice acting is quite good. Much better than that in smackdown vs. raw. The menu music is all the same as SVR and the entrance songs... well they cant really be done bad or good.

Suggestions: fix a few glitches... speed up gameplay a little bit maybe. MUCH BETTER than raw 1 or 2 though.

Overall: Wow i don't care what any one says.
This game is great the best wwf/wwe game ive played. Now down to the game
Gameplay: It plays really well the controls are great the movement is superb a lil bit of disappearing clothes if you know what i mean but hey we see that in all games (ther not all perfect. In order to play career mode you need to crate a superstar "Become a legend" wich is well done but it dose take a long time to do but its worth it. If you got Xbox Live you can take your superstar online and you can wrestle against your friends and see who is the legend
Graphics: The Graphics are one of the best i have seen. The entrances are amazing ther look so real and the game play it self looks great too
Sound: The commentary is brillianet thay remember thing's from previous maches it's like live commentary its so cool.
the music is sweet as allways with wretleing games. Although some of the wrestles entrance music is a bit our of date like Edge's but hey it's all good.
Suggestions: Just make another one

WWE Wrestlemania 21 Glitch
I'm sure most of you know already but here is some assurance that THQ is working on the glitch that will not enable us to connect with Xbox Live.