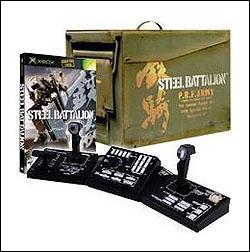 Steel Battalion is an exciting battle-mech simulator that uses the most elaborate controller interface ever created. Take a seat inside the cockpit of a mechanized VT (Vertical Tank) and enter into futuristic military warfare, where you pilot 20 different mechs in a multinational task force operation in an effort to over throw the government. Included with the game is an exclusive 40-button controller to completely maximize the gaming experience, making your feel as if you are actually piloting a mechanized Vertical Tank!
Unlock All VT's and Maps in Free Mission Mode
At the title screen, move the tuner to the following positions and keep it there for one second each position. 1-9-7-9-0-9-0-6 When you complete the code you will hear a sound effect then you will be able to use all VT's and play any mission on any difficulty in free mission mode.

Overall: Great game and I think that this was the beta for the second one. They better get online if they want this game to prevail.
Gameplay: The controls were great. But that is all this game was, was controls. It was fun for a little bit, but I am not a mech fan.
Graphics: Great visuals. I thought the game was very realistic and it was very fun to watch the chaos. But still too expensive
Sound: Great sound. I like the thud of the mech and the sound of the weapons. Yeah it was a two hundred dollar game.

Overall: i am a video game freak since i finally
made the decision to buy a
$200 game and a huge controller with 40
freaking buttons.You can,t miss this
experience it,s worth your money and
time even if you don,t have xbox live is a
fun game to play.
Gameplay: vertical tanks are the ones you drive in
this game(best know as mech
warriors)not mech assault,because is a
firson person view ,besides the learning
curve should take about a day or so if
you are a real addict like me,because
playing with 40 buttons,two joysticks and
three pedals is not something you ever
experienced before,so buy this game if
you want to experience something new.
Graphics: graphics are not the best,but who cares
when the gameplay is addicted and
great like steel batallion,besides if you
have access to xbox live,am sure you
won,t miss the next installment of this
great game since is going to be online
later this year.
Sound: better than mech assault,great
explosions and you can also destroy the
buildings and other things related with
the enviroments.
Suggestions: make sure we can use this giant
controller for other games like air combat
or tanks.

Overall: I cannot get over how good this game is, the graphics, sound and gameplay are just breathtaking, I love it. If only it was Xbox Live.
Gameplay: The gameplay is quite slow but I this isn't a bad thing as i find it quite enjoyable lumbering around, it just feels powerful, and the 40 button Controller adds no end of fun to it.
Graphics: The graphics are amazing, some of the best I have seen especially the shadows and the explosions filling the screen.
Sound: It sounds nearly real with the surround sound and the volume turned up, should have custom soundtracks though.
Suggestions: Hurry up with Line of Contact, Xbox Live is the best!

Overall: Wow, This game is great. From the minute you open the box your anticipation grows. great box too.
If you where an arcade junkie this game is for you. The controller is amazing!! worth the 200.00 alone. If more games are made for this contrller Lookout.
Gameplay: If you like this type of stuff great. If not play sport games. I think the game has great story and really good simulation of how the mech would be in real life situations
Graphics: Lacks the halo type graphics but....This is like arcade games would look, so take that into consideration. I was a neo geo fan so this is a great game to me
Sound: If you have support for dolby 5.1 This game kicks a-s!! The sound is so good with the dolby it is the biggest draw to the game other then the awesome controller
Suggestions: MAKE A SEQUAL, GO LIVE, AND POLISH UP THE VIDEO AND NOBODY CAN TOUCH YOU!! AS FOR THE CONTROLLER WOW

Overall: this game overall was very well thaught about. the 40 button contronler is amazing and the whole story line is great
Gameplay: At first I thought the the gameplay would be very hard with the whole 40 button controler but its acually preety cool
Graphics: this is the only thing holding this game back the graphics just wherent what they could have been.
Sound: also not the best part although it was very good.
Suggestions: improve the graphics and lower the price if it wasent so pricey i would probably buy it

Overall: Ok, so it is pricy. And the size of box makes you wish you got the truck instead of the New Bettle...But it is worth it. You controll a VT (your mech) with more percision (and blinking lights) than any other game ever made. But more to that in a minute
Gameplay: Well, this depends on what you are looking for. If you are looking for a uber-realistc Mech sim; then this is for you. ITs so realistic, that under two differend scenarios (which happen repeatedly for the first couple days) your file is DELETED and you must start over. This dosent matter later in the game, as you have plents of credits and skill to handle anything. I find this refreshing, games too me are to easy now adays, and im having a hell of a time beating the first (i think there are more) campaign on EASY.
If, however, you are looking for a mech fragem, like MechAssault (a game i also own and love) then go with that. It may not be realistic, but it is configured for XBL...
The choice is up to you, but for any hardcore mechfans like me; get both, or Steel Battalion if you have to choose between the two.
Graphics: The graphics are okay... Not the best on the Xbox, but they are near photo-realistic if this was occuring. The screen is a bit grainy and blury; im not sure if that is due to design or lack of effort. The VTS look no where near as finnished as possible... StarSiege and the Mechassault games. Not the best, but they will do. Perhaps the XBL sequal will boast better ones (yes Capcom is making a sequal for XBL)
Sound: There are enough sounds in this game to do.......something (insert some appropriate metaphor here). It sounds like your really piloting the thing. Im assuming it supports 5.1 Surround Sound, but my system is curently down so i cant confirm that. (my suspicion is based on the fact the Dolby logo is briefly displayed at the beggining of bootup.)
Some may complain about the music, but in my oppinion, the music (even though its Japanese) kicks major @$$. (except for some of the Jukebox music...some of it is just plain wierd.) But the cutscene offer killer music.

Suggestions: I dont really have any...Improved graphics would be nice in the sequel (Dont back out of it capcom!), and if possible redo some of the joint artwork...it kinda just meshes together... Other than that job well done. Im extremely pleased that i got this woderful game.