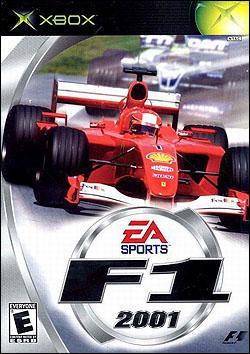 Battle for position at every sweeping bend, high-speed straight away, and hairpin turn within the world's most glamorous sporting arena. From Monaco to Monza, take on the most intelligent and daring racers to hit the Formula One circuit. The circuit comes to life with fully interactive pit stops, roaring crowds, a buzzing grid, driver animations, and a full spectrum of driving conditions, including torrential downpours and other mid-race weather changes. Add the official 2001 FIA Formula One World Championship license and F1 2001 is poised to reach new milestones in motor sports gaming.
Score: 49
Overall User Average: 4.86 / 10 (48.6%)
Gameplay User Average: 5.00 / 10
Graphics User Average: 6.71 / 10
Sound User Average: 6.43 / 10

Overall: the most patheticaly pathetic of pathetic attempts at a pathetic game... one word... PATHETIC!! terribal gameplay, the sim/arcade mix has gone to the dogs, and visuals are great... if you were playing them on a sega-megadrive!!
Gameplay: awful, to call this gameplay is a crime... whats the point in going into more detail... no one in their righ mind would buy this game, let alone for it's gameplay!! all you need or want to know is that it is CRAP
Graphics: flat plastic-like textures, no effects... single textured roads... like those on ps1 games... if this game was a person it would be a fat, spotty, ugly, dirty piece of crap.
Sound: sound is at best sub-average... you dont want to see it, hear it, look at it or play it.. this game is crap.
Suggestions: new developer, new game new everything.

Overall: These games are good for a while then they start to get boring.These games are the rental type.
Gameplay: ..............you go around racing what else can I say.It is neat.
Graphics: The visuals are great I was taken away by the massive amount of detail they put into the cars.That was cool.
Sound: The sounds were cool.I was definatly aware of a car coming near me by the sound of its engine.I liked the sound.

Overall: I've been playing on the BOX for a long time and this has to be the crapest of all the games i've played so far.
Gameplay: The gameplay was as bad as the game was.
Graphics: This was one of the best things in the game,because almost every part of you car can fly off when you hit something.
Sound: I like techno but on this game it made it sound bad because you can't even here it over the blender engines of the cars
Suggestions: Never make another game like this again

Overall: This game is terrible. The only person who could possibly give this a positive review is someone who worked for a game web site or magazine or was otherwise trying to get handouts from game publishers.

EA Sports F1 is totally unplayable. Avoid it like the PS/2 crap port it is.
Gameplay: Unplayable. Do not buy this game. Do not rent it. Send a letter to Electronic Arts complaining about the fact that they released such a putrid rush job.
Graphics: Mmm warmed-over PS/2 graphics. this game looks terrible. for comparison's sake, last night I got out my Atari Museum for Dreamcast and played Pong. Pong kicked F1's nads.
Sound: What is the cheapest possible Asian synth soundtrack you've ever heard? No it isn't, you have to buy F1 to hear the cheapest one.

See comparison above to Pong.
Suggestions: I suggest that you never ever ever trust a review you read on a website or in a magazine that accepts free products including hardware or software from game manufacturers. This game suxorz, but everywhere you look it's rated 8 or 9 or 10.

Overall: The game is Ok I guess, but not being a big F1 fan I didn't really apprecieate it. The controls on easy mode were very easy to learn while on the harder levels they were impossibly hard. Throw in the not- up-to -xbox -standard graphics and you've got a dissapointing game.
Gameplay: The game play might be exciting to a F1 fan, but to a person just trying it out in general it was frustrating at times.
Graphics: The visuals were not spectacular, but they didn't make you recoil in disgust either. This was one of the game's strong points
Sound: The sound was good. The sounds of the engines and the crowd make for a true "day at the races" Experience
Suggestions: Next time you make a game for xbox try to take advantage of the hardware to a bit fuller extent. The game could use something extra to lure non-fans to it as well.

Overall: This formual one racing game is good and a sure treat for any fan. It is everything you ask in a F1 game and more. With this game of all eleven teams and 22 drivers that participated in the season of 2001 you are able to race every individual race track around the world to practice, or you have the choice of playing the whole circuit with one car and one driver. You also have the choice of playing with the rules or switch it off, this is good so you won't be penalized for any faults that you make in the game. All that you see and experience are just the same as they happen in real life..the accidents, tire ware, and the engine problems just to name a few are all factors in actually participating in a F1 race. The only thing I noticed was that the loading time (30-35 seconds) seems to take very long. I don't know why it needs to load that much but to me I consider that to be too long for the Xbox. I know it's not that long and it's a well deserved wait but hopefully in future F1 games this will not be a factor.
Gameplay: During an F1 game it is important to know the rules and be able to top it off with an excellent race..right? Well in the beginning of this game there is an option you can go through, which is similar to a driver's license that you have to accomplish that race in so much time and it shows you how to do certain things with the car. If you don't go through this, you may find it a bit tough..but then again, you may not. It is a bit hard in the beginning though, and this will be sure to help you. I would suggest it because it gives you an idea of what your doing wrong and how you can improve on it. All the buttons responds well to the game, but be careful of when you press the gas (right trigger), that pressure you push is that amount of how fast your car will go, you can start fast and will gradually go faster and faster, it's exactly like driving a racing car.
Graphics: The visuals you see are amazing! The cars physique are truly the same and look very real, and you can distinguis all objects you are viewing..such as the different cars from different companies, etc. I, myself have been to a few F1 races and everything looks the same as I remembered it..the track, the cars..all nice and vibrant colors. For a racing game of the genre it's amazing that they accurately did everything this well.
Sound: The only thing you hear are the effects, crowd, wheels screaching, the pit crew talking to you by radio, and the roaring noise of your engine. You don't hear that much music but in the main menu there is some good tunes. It would have been nice to have the option of playing your own musix but not really necessary when playing this incredible game!
Suggestions: Please make sure there's no more LOADING periode ...... it's unexpectable to have that on the XBOX !!!!

Overall: Formula One has long been a testiment to lousy game creation due mainly to its lack of popularity in the United States. EA Sports has turned that around with a great game that is really close to getting the sport right.
Gameplay: The Gameplay in F1 is outstanding, though sometimes frustrating. The controls are basic in the "easy" mode and scary in the "simul
ation&quo
t; mode. Thats what simulation of F1 driving should be, scary. The car reacts in every way it should with engine failures and tire loss. All in all the gameplay is fun, however NOT for fans of Project Gotham Racing.
Graphics: OUTSTANDING! Every detail of the cars are right graphically the tracks are "on track" with their real life counterparts, and weather conditions are amazing. (The rain makes the road wet and continues to wet it down)
Sound: Would be better if the crashes had more sound to it, but the pit radio is great as is the actual engine noise. (Any F1 fan loves the roar of the big engines)
Suggestions: Overall an excellent game, however here is my wishlist

1. Create a driver option
2. Ability to work up in the ranks
3. Create a team option

KEMCO proudly announces the release of Asdivine Cross for Xbox consoles, including Xbox Series X|S and Xbox One, set to hit the Microsoft Store in two weeks.

Now, Xbox Series X|S owners can experience the thrill of driving these monsters on wheels! Combine the power of the new consoles with that of huge trucks in Monster Truck Championship to crush your opponents in 4K 60fps, solo or online multiplayer.

Hunt spiders with extreme prejudice and zero regard for collateral damage as you squash, shoot, explode, burn, or bomb your way through suburbia on your quest to defeat this most terrifying and elusive nemesis!

Xbox one no signal
Post by debrartin
0 Replies, 41097 Views