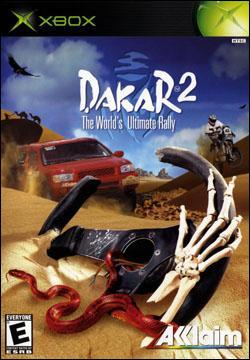 This most gruelling of races stands alone in the rallying world as the toughest race of it's kind. Certainly not for the faint hearted, it draws upon the skills, strength, metal agility and sheer determination that is only found in the most unique of characters. Following from the European success of Paris-Dakar 1, Dakar 2 takes the official license to the next level in this all out arcade version of the most radical endurance rally in the world. Dakar 2 takes the brand into new territory and redefines what really makes a rally game tick!
All Tracks:
enter the code BONZER
All Cars:
Enter the code SWEETAS

Overall: Overall I was very impressed with this game. Not the greatest Rally Sport game I have ever played but by far not the worst. The game made for an enjoyable experiance. Multiple levels of difficulty as you get on through the tracks. The vehicles and their movements could be more realistic but oh well it was still fun.
Gameplay: Enjoyable gameplay, various levels of difficulty. Multiplayer is lots of fun going head to head with friends.
Graphics: Graphics aren't spectacular but they aren't horrible either. It's a nice blend that looks quite realistic.
Sound: Sounds were very good, bikes sounded like bikes, trucks like trucks and cars like cars. What more do you want? Music that was on the game wasn't bad either.
Suggestions: Keep working at it, you are on the right track. Perhaps allow for break downs a little bit more leway to allow for off road driving. But beyond that keep it up.

Overall: Dakar 2 is an insult to the race it mimics, with the worst physics of any rally game and abominable graphics to match.
Gameplay: The game features a range of environments, and basically allows you to race on sections of the course that you would traavel through were you actually on the race. It features large lorry type vehicles and scrambler bikes to drive along with landrover type cars. Sadly the terrible physics mean that all the vehicles move like cardboard hovercrafts. They fly around in the most ridiculous manner, with no regard for weight and balance at all. This is really bad.
Graphics: A total shambles for an Xbox game. The frame rate is jumpy, the cars are about as detailed as a NES game, featuring the worst looking motorbikes on Xbox, and the pitiful attempts at environments are laughable. Utter trash... And thats being kind...
Sound: Again, utter trash. The cars? They all sound the same. The music only emphasises how annoying the graphics are...
Suggestions: Don't buy it. Advice to the developers? Don't bother next time...

Overall: worst game on the xbox, hands down. . . you think kabuki warriors was bad? well think of kabuki warriors, but at the same time you're playing, you're being force-fed animal feces. . .
Gameplay: this has the gameplay of a wet paper bag, except when the wetpaper bag is laced with human fecal matter, and on fire. . .
Graphics: To be honest, and I'm not a sick person or anything, but I think monkey nuts are more fun to look at than this game
Sound: the engine sounds are alright. . . but thats to be expected from a game that involves things that have engines. . .
Suggestions: fall off the face of the planet, but don't die, just sit there in the eternal nothingness. . .

Overall: The overall description of this game is .............................well AWSOME!
Gameplay: The game play of this game was a lot like 4*4 Evolution.And I really liked that game as well.Yes I did.
Graphics: The visual effects were even more reallistic than 4*4 Evolution.I was at first angry at how the cars fliped it was hard to turn them over and later I saw that it was kind of neet.
Sound: The sound effects could have been a little better.I found that after a while the sound of the engine drove you up the wall.