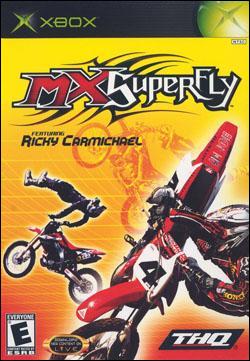 Its been a while now since MX Superfly made its appearance on the xbox but the game still holds its own. A big action sports fan will have a blast with this game with features like freesyle, racing, and all kinds of other fun little mini games. Not too mention its xbox live abaility."

read more
With the most career wins in the sport, Ricky Carmichael takes it to the next level along his videogame. Racing and freestyle explode on the Playstation 2 and GameCube this summer with expanded career modes, all new mini-games, top-notch pros and unbelievable stunts including the first freestyle track editor.

Reap the rewards of racing through an entire season of pulse pounding motocross action while upgrading your gear and bike along the way. For free ride madness compete in the all-new freestyle career mode dazzling the crowd with new tricks and sick maneuvers. Or simply ride the open terrain searching for secret areas without the burden of competition. It’s your bike – now ride!

Overall: This game is pure motorcross . If your a fan of the sport , like me , then this is considered to be the best game on the xbox (bar halo).
Gameplay: This game captures motorcross perfectly . It's as close as you can get to actually getting on a 250cc and burning a track yourself !.
Graphics: Ok , the graphics might not be up to xbox standards , thats fair enough , but what can you expect from a motorcross game ? . The bikes and enviroments are fine , so thats all you need.
Sound: The sounds of the bikes are perfect .And the music is amazing simply because i burned Linkin parks' "Meteora" album onto the game . great stuff !
Suggestions: Make a new one , and improve the graphics alot.

Overall: This Game is a must buy, It has everything a good motocross game should have.Such as freestyle track editor, Freestyle and Race career modes, mini-games and outstanding tricks and tracks.
Gameplay: This game just has the best game play possible for a game of this kind. The controls are easy and very comfortable and the list of tricks you can do goes on and on from a rock solid to an experimental propeller this is an amazing game.
Graphics: the visual is quite good the people look pretty realistic but the way the people fall off their bikes is the only thing wrong with this game and there is no blood! But all the tracks are very well done and detailed.
Sound: The sound is actually very good, It has a great soundtrack with some great songs . There is nothing to complain about.
Suggestions: make the riders crash a lot better with blood and make it look gruesome.

Overall: I love offroading so this game was right up my alley. It reminds of the Motocross Madness series except its definitely better. Bottomline is if your into this sport you'll at least like if not love this game.
Gameplay: The controls take a bit of time getting use to but after it becomes second nature the game is very enjoyable. The bikes handle nicely leaning more on the arcadey side especially since its somewhat difficult to dump the bike. This game plays very well and everyone in my family gets a kick out of it.
Graphics: The graphics are above average and could've been better but that can be said about most games. It has nice details like the riders ac !&%$@#* ulate dirt on their uniforms the longer you ride. The particle effects of the roost looks good. Overall the graphics are well done and the framerate is silky smooth.
Sound: The Bikes sound somewhat like they are suppose to. The soundtrack is above average except for the title track (yuck!). Plus you can use your own soundtracks.
Suggestions: Incorporate system link and online racing into the next version please.

Overall: The last time I played a motocross game was Motocross Madness 2 for the pc about three years ago. Things have come a long way since then.
Gameplay: Control is key, there is no way you'll do well on this game if you keep the throttle peaked the entire time, which is a good thing. You will need to use realistic strategy in the turns and on the hills to keep up with the rest of the pack.
The only downfall I see, it's hard to crash, if you hit a hay bale, hill side or a wall at full speed, you just bounce off and continue on.
Graphics: The riders getting more dirty as the race progresses was a nice touch. The details around the tracks were pretty well done.
Sound: I didn't really care for the sound track, too much hip-hop for my taste. Well, any hip-hop is too much for me, but luckily you can turn that down, or add your own. The bike sounds were "fair".
Suggestions: The development team for this game did an overall very good job. Please keep the bouncing menus out of the next version, that is so annoying.

Overall: It's about time they got this title on the shelves. The extra time was spent fixing up the graphics from the ps2 and GC versions...you can tell the difference. I have not played through the career mode so only the 125 cc bikes are open. But from what I have seen so far this game is a much better experience then mx2002.
Gameplay: Gameplay is solid. The controls work good..although pressing down on the left analog for powersliding can be clumsy at times. If anyone has watched ricky carmicheal ride you know that he basically powerslides through all his turns...in essence steering the bike with his back wheel instead of his front...they captured this well with the use of the powerslide. The racing can actually get pretty intense..with short breaks during air time...speaking of which you get plenty of. They have a preload function for clearing big jumps..and a jump low button for staying low and goin fast. The tracks are done very well...good flow and some can be very technical.
Graphics: Like I said they delayed this game to pump up the graphics. The tracks look awesome...the dirt is photorealistic and there is plenty of eyecandy. The only thing bad about the graphics is the trees that line the tracks...they are horrible looking but oh well not a big deal at all. The bike and rider models look good..actually look great except that sometimes the bikes and riders look to narrow. I'm really glad that they redid the graphics for the xbox. Overall the game has a really clean and detailed look to it. Much better looking then mx2002.

Sound: I actually like the sound in this game. Bikes sound like bikes...what a concept. You get a track intro by davey coombs and then they are quite. Occasionaly the riders make stupid comments when you bump them but it's not too cheezy. Not sure about custom sound track...haven't checked it out yet cause I like the stock music. I tried out the yz250f and they did a good rendition of the 4 stroker audio.
Suggestions: xbox live racing!!!!